Newspapers are dinosaurs, RSS is for news 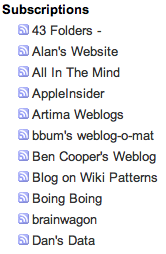 The cleaner here in KL asked for the newspaper the other day, she wanted to clean windows. I don't have any so she had to make do. Newspaper is particularly good for cleaning glass.

Despite years of buying newspaper mastheads, Rupert Murdoch knows that in their current (printed) form they are on the way out. "Classified revenues are undoubtedly migrating to the web, probably not to return." When he buys a paper, he's buying the brand, and that is valuable to consumers trying to pick through the noise on the net trying to find the signals.

When, in my RSS feed, I saw the headline of Steve Gilmore's post on Techcrunch saying "Rest in Peace, RSS", I figured he's probably just doing Dvorak's old trick of saying something that lots of people will angrily disagree with to drive traffic. Then later he'll claim we all misunderstood and he's really actually not mad. He did make me pause to think, so fine.

I knew Dave Winer, developer of RSS, would respond and he did so with great eloquence and use of insightful metaphor.

For my money, RSS is a fantastic foundation. Every day I get up, make some breakfast and look at my news feed in Google Reader.

I feel pretty well informed, we do get the newspaper at home and I like to flip through it, but there's not much in there I haven't already seen and there's a whole lot of stories I am interested in that are either missing or turn up days after they appeared in my feed.

The agencies have claimed that Google is stealing their news, but really what Google news has highlighted is how little original news there is. If you look at a story you'll see that it's come from a wire service and is repeated in hundreds of other newspapers.

695 copies of the same story? We don't have to do that any more!

That intelligent de-duplicating of stories that Google News does so well needs to be applied to Google Reader. I do suffer from seeing the same story spread to all my favourite sites and be repeated.

The choice is between speed and insight - I chose both but I'd like to summarise my feed down.

I hope subscriptions to wirelessly networked news reading tablets will be the business model that supports thoughtful journalism.

Printing news on crummy paper and throwing it roughly in to the garden is a technology that should have died long ago.

Now, how are we going to clean glass in the future, there's a business opportunity..
Posted by Peter Marks at 4:51 AM