I purchased a small (26cm) active loop antenna called a GA-800.  So far quite impressed. 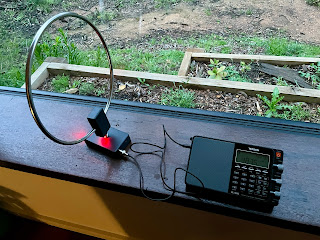 The bottom part has a re-chargeable battery with USB-C charging. 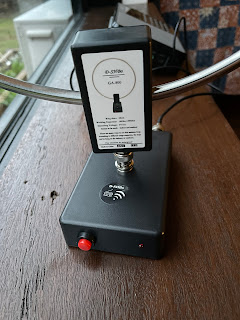 Interesting to note that for best reception in a window, the plane of the loop should face out.

Reception with the loop is significantly stronger than when using the whip antenna on the radio.

The loop can be separated from the power base part if desired. I'm sure it would work even better in a remote configuration.

Posted by Peter Marks at 8:05 PM No comments:

The re-branding of the BOM to The Bureau of Meteorology, hereinafter to be referred to The Bureau is reported to be costing $220,000. But what about all of us developers who use their excellent APIs? My little K index reporter used to look like this during startup:

Never fear, we've pulled the team in and made the necessary changes:

But of course the website and api URL domain names still have "bom" in them so we're standing by for any breaking changes. ;-)

Posted by Peter Marks at 4:59 PM No comments:

I was a guest again this week on Marc Fennell's "Download This Show" on ABC RN.

As I no longer live in Sydney I'm a remote guest and this week my audio is a little weird as we used FaceTime audio to get me there.

Alex Jones must pay Sandy Hook families nearly $1 billion for hoax claims made on his conspiracy news service Infowars. Will it help to deconstruct one of the most potent engines of misinformation in the history of media?

And what is the point of going to work in an office if you’re just going to spend the day on video calls?

If you don't catch it on air, you can listen here.

I've just read the essay by Waleed Aly and Scott Stephens in issue 87 of the Quarterly Essay. I wish I'd read this before we made the program.

The authors argue that treating people with whom we disagree with contempt rather than trying to see the world from the best version of their point of view hinders proper debate and, by extension, undermines democracy.

Recently I've interacted with several people who believe that COVID vaccination is some sort of conspiracy that ranges from being motivated by money making all the way up to a deliberate plan to kill people. I must admit I have sometimes treated people with contempt, not requiring serious debate.

Aly & Stephens have shown me the error of my ways and I will try to do better.

This radio promises very wide coverage and while it is disappointing as an HF receiver, it is a passable receiver of narrow band FM on the 2m band.

I'm still figuring out how to operate this thing but so far I wouldn't recommend it for short wave.

Posted by Peter Marks at 3:29 PM No comments:

A GDO is a useful little test instrument for finding the resonance of a tuned circuit. These tuned circuits might be in a VFO or perhaps a trap for an antenna. Many years ago I had a commercial version that was quite large and had a large tuning dial. (The plug-in coils deteriorated over the years). Recently I ordered a modern version in kit form from HecKits.

The instructions are good although I found that the board deviates slightly from the image in the instructions and, as there are no component overlays, it can be a little tricky to figure out where each component goes. 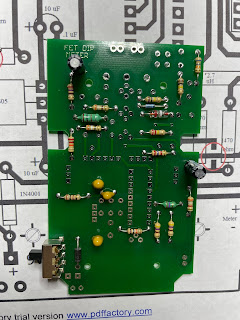 The board went together quite smoothly, with just a little head scratching. Clearly there are a few changes since the manual was written but all worked on first power up for me. The kit comes with the lowest frequency coil pre-wound, which makes it easy to test. 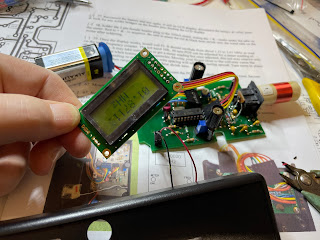 In the end the kit all worked and fits into a nice compact case. I made one error in that I reversed pin 1 and 3 in a coil I wound and consequently had trouble getting it to oscillate. It didn't take long to figure out the problem and reverse them. 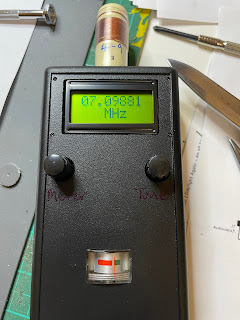 As well as finding resonance in tuned circuits, this device is a handy small signal generator. The kit isn't cheap - US$100 plus some extra postage to me. My kit came with some spare multi-turn pots for some reason.

To get a line over high branches here I've been using a cheap but decent drone out of China called a Flyhal FX1. They are about AU$300 but seem to have gone up in price since I purchased.

I've used it quite successfully to inspect the roof and solar panels. The camera isn't great. It's 4K but not very clear. Live video is sent back over Wifi which doesn't have good range but I tend to fly just by eye anyhow.

Here's some video of me using it to raise a line over a tree:

As a result of this activity, the drone has suffered damage from a few heavy landings. One arm broke and has been glued a few times.

Today, for some reason, the battery pack will no longer charge. It has convenient USB-C charging and a set of LEDs to show what it's up to. Now the LEDs just all flash together and it doesn't charge. I pulled the battery pack apart and it seems that the 12V is simply connected to the far left and far right pins so a standard Lipo battery connector was soldered in place. 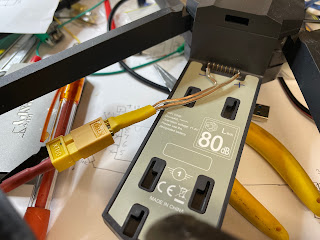 A 3S battery can be connected and held in place with velcro or rubber bands and the drone appears to power up as normal.

As I write this I haven't flown it yet (the glue on the broken arm is still setting). I'll update this post when I do take it up. Update: It looks like two other pins are needed to measure the battery level. I tried to fly but the controller thinks the drone is flat.

Posted by Peter Marks at 2:53 PM No comments:

One of the most impressive recent bits of SDR software is the open source SDR++ (often spelt sdrpp).

It's very responsive when used locally, I think it rivals SDR#, and has a very interesting feature called server mode.

Put simply, you get it working with your SDR hardware then run the app on the command line as:

Then you run another instance of the app on your network and connect to the sdrpp server. Here's a snippet of it running here:

Over the network is is very responsive (both server and client machines here are connected over Wifi). 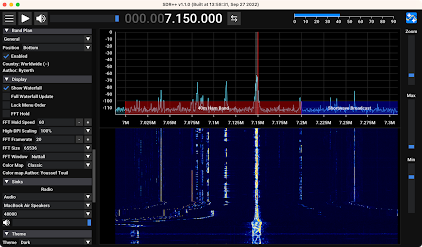 Note that the last official release doesn't have this feature in it, you need to get a nightly build.

I've also been using SDR++ as a remote client to an AirSpy HF+ shared with spyserver. This works very well. 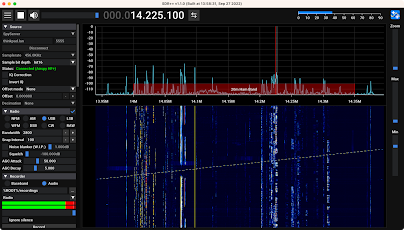 I think this is the best macOS SDR client I've used so far. Here's a recording of me tuning around 20m at 17:00 local time.

Posted by Peter Marks at 4:42 PM No comments: