Today the ARNSW Home Brew & Experimenter's group got together at Dural to show and talk about our "challenge" receivers. Here's some edited highlights:

Mark ran the broadcast transmitter exciter to provide a signal but it took us a while to realise that the 3.7MHz morse beacon transmitter was running and causing problems for some receivers.

I've written up mine here and it's in the video above.

Alan, VK2ZAY, was away but supplied some video. He's written up his receiver here.

Missing is Stephen VK2BLQ who we believe built a receiver, hopefully I can get some video of his rig to add to the collected video.

Thanks to whoever suggested the challenge project. I think because we were all to receive the same broadcast signal it made for a level playing field. Thanks to everyone who participated and let me video them.

The receiver is built on a 5 X 5cm circuit board, Manhattan style. The circuit has been drawn as per the layout on the board.

Signal from the antenna enters via a 1K linear pot which is used to attenuate very strong signals. The 2 X 1N914 diodes clip all strong signals including the broadcast band.

I used rewound 10.7 MHz IF coils (from a junked 40 MHz hands free phone) for the tuned circuits. Slug tuning of these saves on having trimmer capacitors.

The 3.5 mHz ceramic resonator is still cheaply available from futurlec.com. The 100pf tuning capacitor has a 6:1 reduction drive. All small capacitors are ceramic NPO.

A 78L05 provides regulated 5 volts for the MC3371 and also keeps the oscillator very stable, such that tuning into the WIA broadcast (3.595) at switch on does not need adjustment for the duration of the broadcast. Tuning is from 3.540 to 3.625 however the use of a 160pf polyvaricon could be used and should provide coverage from 3.500 to 3.620. The wire from the tuning capacitor to the resonator is thick and short to minimize inductance.

Duplication of the receiver is easy and non critical. When the circuit board mill gets going it will be a snap.

Alternatives to the MC3371 are MC3361, MC3359 and MC3357. Using these, all the left hand pins connections are identical. The other pins are different but are left no connection anyway.

YouTube Insight is interesting.. it seems that the video above is not very interesting to women:

Giving out how to vote cards at an election

An old friend Debbie Richards ran as an independent in the State election so I offered to help.

This morning I handed out "how to vote" leaflets for the independents at the local polling place here in the safe Liberal electorate of Wakehurst.

There was a nice camaraderie among the how to vote volunteers. Greens, Christian Democrats, Labour and a gang of Liberals were in attendance.

Voters fall into three categories: they are pre-decided and either take nothing or just the one they want, they take nothing as they object to the waste of paper, or they dutifully take one of everything.

Recent Australians, and I know there were some as I saw a citizenship certificate in hand, seem very pleased to be greeted by us and examine our handouts.

A few voters ask questions or have a go about something or other. The Christian Democratic Party (Fred Nile) seemed to get the most vitriol from punters, in part because the local candidate is called Paul Green and people looking for the Greens how to vote took theirs by mistake and when they realised would screw it up and dispose of it.

I enjoyed the morning, despite a bit of rain and wind, it was a good way to catch up with local friends and neighbours.
Posted by Anonymous at 7:12 PM No comments:

Browser wars at the train station

At Wynyard Station in Sydney yesterday I saw this ad on the platform:

I think it's great to see the browser wars continuing with IE9 last week, Firefox 4 this week and news of a future Chrome browser that you can talk to.
Posted by Anonymous at 7:23 PM No comments:

Encouraged by the success of the 80m DC receiver built in a CD ROM drive case, I spent some time re-packaging a previously built 80m DC transmitter into another case so they will work together as a matched pair.

The transmitter has the job of antenna switching.

I didn't do a very good job of arranging the boards but happily there's plenty of space.

These bits have previously let me have a contact from Sydney to Melbourne, about 700Km so I'm confident I can get a functional home built transceiver going. Last time I played with this circuit I had RF feedback troubles which I'll probably have to have another go at with it all in one box.

One problem is that the transmitter is crystal locked on 3686 while the receiver is tuneable so I'm going to need a way to "net" the receiver to the transmit frequency - presumably by powering up just the oscillator and leaking a bit of it through to the receiver.

The receiver is currently centred on 3595 for the ARNSW Home Brew group challenge, but after that's presented next Sunday, I'll move it to match the transmitter. (Peter VK2EMU has already been hinting at a followup challenge).
Posted by Anonymous at 10:10 PM No comments:

Here's a movie showing the wsprnet map for 40m for a full week. I thought it would be interesting to visually see how propagation changes as the earth turns. The lines are stations that can hear each other.

To capture this I set up an old MacBook with the browser open at the map view. The page has a refresh time of 1200 seconds built in. MacOS has a command line screencapture utility so I created the following cron job to run it every 20 minutes and save the capture to a PNG image named with the date and time. The movie is running at six frames per second.

I disabled the screen save and sleep, in the Energy Saver control panel.

After a while images build up in the output directory.

The best way I know to turn the image sequence into a movie is to get a copy of Quicktime 7 for Snow Leopard from the install CD (the current Quicktime Player doesn't have this feature).

Quicktime needs the images to have increasing sequential numbers in the file, a little python does the trick:

Quicktime 7 (Pro) can open an image sequence and you can set the frame rate.

Then you choose the frame rate.

Finally I saved the movie and uploaded it to YouTube.
Posted by Anonymous at 1:56 AM No comments:

The current "challenge" project for the Home Brew Group is to build a direct conversion receiver for the 80m WIA sunday broadcast on 3595KHz SSB.

While this is pretty trivial for many in the group it's appropriate for my level of construction and happily I have a working receiver which I'm listening to as I type.

The box is a CDROM drive box with the guts ripped out and a simple aluminium front panel added. This is an idea I first saw from Stephen VK2BLQ. At Wyong I picked up a few drives just for this purpose.

The circuit is the classic NE602 / LM386 design from early on in EMRFD. Construction is "ugly" but it seems quite stable.

Ergonomics leaves something to be desired, I think I'll move the antenna socket to the back, and the tuning needs to be less sensitive. (I have a lovely reduction drive but I'll save it for something more substantial).

Here it is achieving its objective, listening to the Sunday broadcast.

As requested by John, here is the circuit from Experimental Methods in RF Design. The only change for 80m was to use 40 turns of #33 wire on the two toroids.

Since the video I have made the tuning less sensitive by adding series capacitance but it probably still needs a fine tuning knob. Also, I'd love to have another go with smaller components and try to get this down to a more compact size suitable for travel.

Here's how it sounds listening to the latest broadcast on a speaker this time.

I've completed installing the radio in its case and fitted a fine tuning knob and power switch. Here's how it came out.

The perfect size for many smaller projects, that is ones too big to fit in an Altoids tin.

The battery clip is a little dodgy. 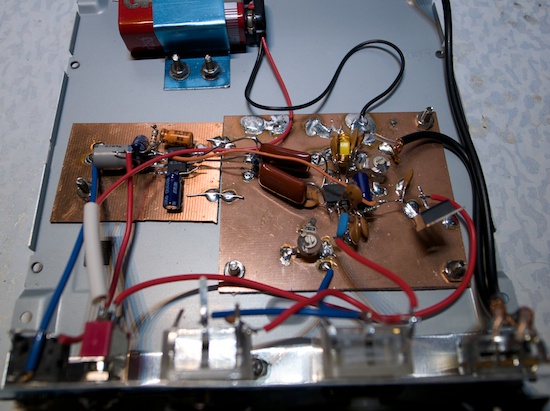 All boxed up, with a new fine tuning knob, listening to the broadcast.

I'm done with this project now.
Posted by Anonymous at 10:43 PM 7 comments: