I'm a long time subscriber to MobileMe/.Mac. Despite the rather high price, the convenience of going to any new mac and having all my contacts, calendars, and bookmarks sync over is a real time-saver.

Syncing is a hard problem. In the days of the palm pilot I used to sync with several computers and use the palm as a way to do this, but sometimes I'd end up with duplicates of everything. Great way to spend a few hours on a flight - deleting every duplicate contact.

Now that I have an iPhone, the instant syncing of new contacts and appointments is fantastic.

There's one feature of MobileMe I've never tried before, the iDisk sync to your local machine.

Normally, when you click on iDisk in Finder it magically mounts (disturbingly without an unmount button) and you drag files in and out. The Public folder is a great way to publish files on the internet to give to people (rather than trying to attach them to an email).

If you turn on iDisk Sync in MobileMe preferences, the contents of your iDisk are copied to the local computer and any changes at either end are synchronised.

I've read some pretty bad comments about this feature, and it hasn't all been plain sailing for me, I've had a few sync errors even though I'm just syncing one computer so far.

Presumably they are having to sync over a WebDAV connection and can't take advantage of rsync style optimised algorithms. It seems to spend a lot of time "checking items" when I know rsync can do this in a fraction of a second.

One interesting thing is that even though the contents are actually stored on my local disk, it behaves as a separate volume and dragging a file to the iDisk copies it as if it were remote.

It gives me a great sense of security knowing that my key work documents are available even if my laptop is damaged or lost. Combine that with a Time Machine backup and I feel more backed up than ever before.

Hmm, I do run into some problems. If sync fails, while there are tips around on the net, there's no user interface to resolve these issues.

If I edit documents in the iDisk area while auto sync is enabled I get errors like this: 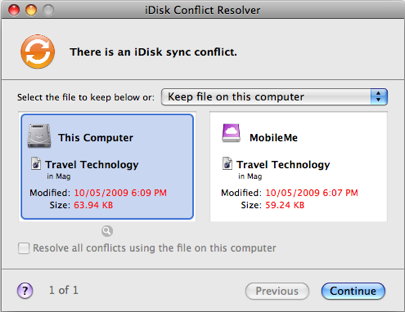 So after a few weeks, my initial enthusiasm has waned a bit. Syncing to the cloud like this is something I want to do, but it's a tough problem. iDisk sync is on the way, but it's not there yet.

I'm happy to report that since the system update to 10.5.7 iDisk Sync seems to be working perfectly. I haven't seen any errors and syncing seems as fast as I would expect given the file sizes and internet speeds I'm working with.
Posted by Peter Marks at 4:35 AM