I'm pleased to announce that a new version of the iPhone App "WSPR Watch" is now available in the App store.


Plus there's some cosmetic and operational improvements. WSPR Watch is free and pulls its data from the old database page of WSPRnet.org (thanks to those folks!).

Thanks to Will and Ross for suggestions and testing. 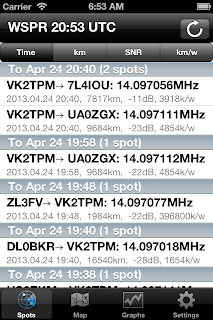 Posted by Peter Marks at 7:03 AM No comments:

I hope I'm mistaken about this but my experiments seem to suggest that iOS downloads large files significantly slower than an Android device on the same Wifi network.

For the test I download a 70MB test jpeg file in the Chrome browser on both an iPad Mini running 6.1.3 and a Nexus 7 running 4.2.2. The Wifi network is an Apple Airport Express running 7.6.3.

I forgot to show it in this video, but the Android version is really there at full resolution if you tap on it.

I've repeated this test using Safari on iOS and it's the same so I think it's something to do with Wifi or the TCP stack.

Has anyone else noticed this?
Posted by Peter Marks at 9:31 AM 3 comments:

Fibre to the premises or to the node?

The complex and expensive national infrastructure project to create a National Broadband Network in Australia is underway. Not surprisingly it is taking longer and costing more than initially hoped and now the opposition is proposing to cut costs by cutting an important corner.

Rather than doing the hard part, taking optical fibre to each home, they propose to run fibre to nodes and re-use existing copper to get to houses. This approach will deliver an improved internet at a lower cost but both only in the short term.

To me, it's like building a highway system with dirt road off-ramps.

Looking back at the history of internet speeds it's clear that speeds grow logarithmically and there is not sign that this will slow or stop. It's inevitable that the last mile of copper will be a choke point and a future government will have to come back and finish the job.

ABC Radio National Breakfast aired interviews with me and finance correspondent Sheryle Bagwell where we looked, in turn, at the technical and financial analysis of the alternate plans.

As I said in the interview, this is not really about politics, it's about the relentless march of technology.
Posted by Peter Marks at 8:48 AM No comments: