WSPR Watch is a free app for iOS that displays data pulled from WSPRnet.org. Originally I wrote my own code to draw charts of reception data but my clumsy attempts were pretty simple. Recently I started using the excellent Charts library and this has opened up all sorts of improvements. For a little while, the app lost features but now I think it's looking better than ever, particularly for stations that band hop.

There is a catalyst version of the app for macOS but it's not a great macOS app at this point. Thanks to everyone who has sent encouraging emails (you can do this through the app) and if you like it, please consider leaving a review. Latest version as I write is 3.29.

Prompted by carrying too much equipment on a SOTA outing, I purchased a new low cost QRP transceiver from China. The Xiegu-G1M is very small and was dwarfed by the SignaLink USB I normally use for digital interfaces so I sent off for the new Digirig interface and have been working to get it going. 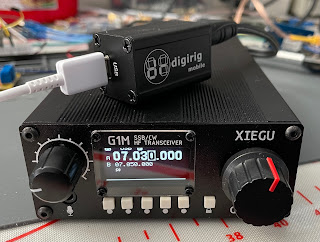 As there's no VOX I need to control PTT via CAT. The G1M manual is rather vague about CAT control and the radio doesn't appear in the Hamlib options yet. The user guide suggests using IC-7000 but that didn't work for me. IC-7300 worked to some extent but was very slow, including PTT on and off.

Examining the event log in Fldigi, I could seen loads of errors and timeouts which would explain the slow operation.

I took the RigCat IC-7300.xml and stripped out everything except frequency and PTT. Later I found the xml for the Xiegu-G90 and took the mode setting from that. Rig control works enough now for digital modes. I've put Xiegu-G1M.xml up on GitHub. (Download the raw file and configure Flgidi rigcat to use it).

The serial connection on the DigiRig is 3V and this talks nicely to the G1M with a straight through 3.5mm stereo cable. Next step is to make up a cable for audio in and out.

One note on the Digirig... one of the 3.5mm sockets broke off after light usage. It looks like the connectors are surface mounted and there's not much solder there so I re-soldered them and hope they'll hold up to normal use now. 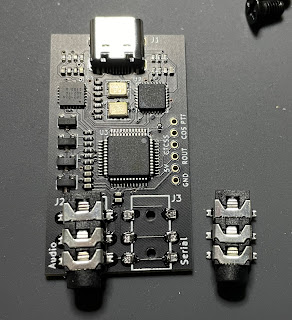 The Digirig interface is a very neat device containing a USB hub and both serial and audio interfaces working through a single USB-C cable. I feel the 3.5mm sockets are a weak point though.

I've made up an audio cable with a 100uF cap to block the DC bias on the mic. All seems to work fine with fldigi. 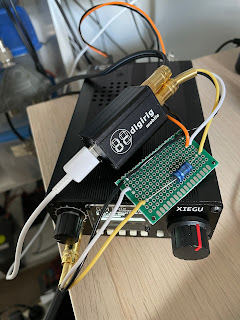 Listening off air, the transmit audio sounds a bit over-driven - I may need to add some gain reduction on both transmit and receive. A bit more feedback to the fine Digirig makers - the 3.5mm sockets are very close together and I hunt around to find plugs that were narrow enough to fit.

I've been playing with SDR++ by Alexandre Rouma is available for macOS, Windows and Linux. Others, such as SDR#,  work well on Windows but mostly I run Linux for ham radio and it's great to find one that works as well on Linux as on Windows. Here it is on Windows: 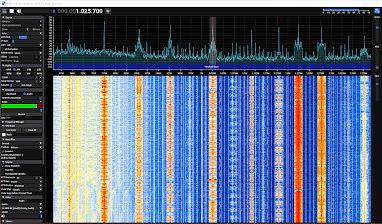 Even on a low end laptop, the spectrum display updates fast and the receiver works well. (My reception here is terrible though). Here it is on Ubuntu 21.04:

I did run in to a common issue on Ubuntu 21.04. The app crashes on startup. If you run it in a terminal you see this alarming log message:

Apparently it's due to multiple drivers in the soapysdr system. A workaround is to remove them all by running:

It's mentioned in the troubleshooting section but I searched for the message with exclamation marks and so didn't find it.

Fantastic to see a high quality, high performance SDR client. I've used it with an Airspy HF+ and an SDRPlay. Others are using it with audio re-direction to receive digital modes.

Posted by Peter Marks at 5:29 PM No comments: