On the bench - double sideband exciter

I recently constructed the Bitx20 kit and so far, despite willing help from the Yahoo! group, I've failed to get it working. 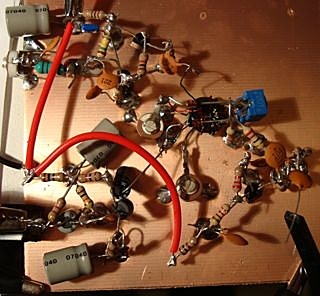 It's hard debugging a densly packed circuit board, so I decided to build a duplicate transmitter chain ugly style as you see here.

This is most instructive for me. It's laid out pretty much as the circuit diagram and I can easily measure at any point.

The Bitx20 is a marvellous design and there are lots of handy guides to construction and tuning around but, for me, what's missing is a circuit diagram with both DC and AC waveforms at every stage in both transmit and receive mode.

Anyhow, it's all for the best. I've often built a kit that's just worked first go and really it doesn't teach me anything. I'm hoping that after getting something similar going in this way I'll be able to go back and compare with the PCB version and figure out what's wrong.
Posted by Peter Marks at 5:53 PM