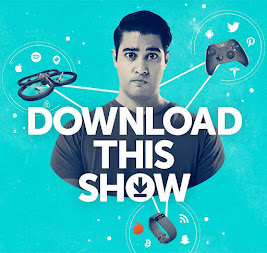 Once again I was a guest on ABC RN's Download This Show presented by hard working and talented Marc Fennel.

"The Commonwealth Bank is adding cryptocurrencies to its banking app, becoming the first Australian bank to offer such a service.

Plus, Twitter launched its new subscription product, Twitter Blue, in the US this week but some experts are asking why some simple features are hiding behind the paywall.

And the US Justice Department is suing Uber over allegations it has been overcharging disabled people".

In the old days we used to go to an ABC studio to record shows like this. These days we're all remote. I've been working on improving my audio and the latest addition is a pop filter which lets me get closer to the mic without popping and I think my sound is comparable with Marc in the studio.

Listen on 300 big power AM stations on Thursday at 11:05 or you can listen on line here or via podcast.

Programming a Yaesu VX-6 with Chirp

I've moved to Melbourne, Victoria, and my 2m hand held radio didn't have any of the local frequencies in it. It's a real grind to program memories through the keyboard and, while I'd done a few, I'd also made mistakes along the way.

A serial cable was purchased from AliExpress and this morning I got it going. 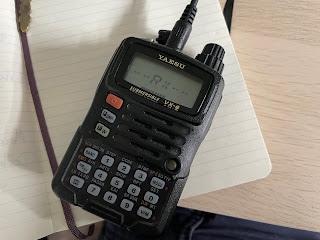 The cable came with some software on a mini CD ROM but I don't have a way to read those so the next step was to get Chirp. I tried it on macOS, Linux and finally Windows, before the UI told me what I needed to do to get started..

Turns out, with a VX-6, you need to hold the F/W button down during power on and then press BAND to start the upload from radio to Chirp. (Those instructions weren't visible on macOS or Linux for some reason).

In the end, I threw away my own memories and grabbed the Chirp CSV file from the WIA which has all of the repeaters in it, with names showing the call signs. Great stuff WIA! 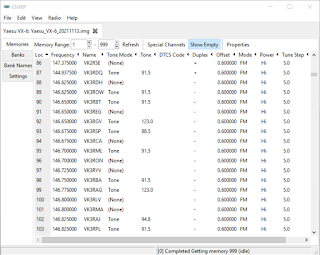 Uploading to the radio is similar, power on with F/W but then push V/M to start download. It took a few attempts to get all this to work, it seems timing sensitive.

Anyhow, now my radio is filled with repeaters and I was very happy to find that I could trigger the Macedon repeater, VK3RMM, from home for the first time. (Clearly I had something wrong with my manual configuration).

Note that the CSV file from the WIA which could be imported by Chirp was from the file titled "Example VBScript, Sorted Directory csv and CHIRP csv files and other csv formats WiaRep2 211009.zip" from this page.

My sincere thanks to whoever put this file together.