Avatar and the Apple tablet computer

Saw Avatar in 3D at iMax yesterday. Recommended. I don't think it will stand the test of time, in that the story was so derivative that it will fade into memory pretty quickly but the lush visuals reappeared in my dreams which is always a good sign.

Like Minority Report, the film demonstrated some interesting ideas about future computer interfaces.

As CES and Apple's January 26th announcement draw near, I'm thinking about tablet computers a great deal at the moment.

If my hands are on the keyboard a mouse is a very convenient tools for pointing at things, it's close to the keyboard after all. Holding my arms up to a screen at head height is not going to work.

If a tablet was held in one hand then touching the screen to manipulate objects with the other seems to be the natural way to interact. I'm definitely looking forward to that.

The iPhone 3Gs 'oleophobic' screen coating shows that it's possible to have a capacitive touch screen that doesn't end up covered in grease smear - so that's an important technology.

The screens in Avatar were touch controlled, the only silly thing was that they were see through, presumably to enhance the movie scene. Aside from heads up displays, I can't imagine why you'd make screens transparent.

Here's my guesses/wishes on the Apple Tablet.

People criticise the iPhone for not multi-tasking but poor battery life complaints hurt much more. I wouldn't be surprised if the iPad only uses power for the frontmost app and sleeps everything else. The notification system is the right answer for this in my view.

The big unknown is the screen technology. If we are to replace newspapers and magazines then this device needs to be readable in daylight. When the iPhone screen debuted it was way ahead of any other phone screen, it wouldn't be a shock if they had something ready to go again.
Posted by Peter Marks at 11:41 PM 5 comments: 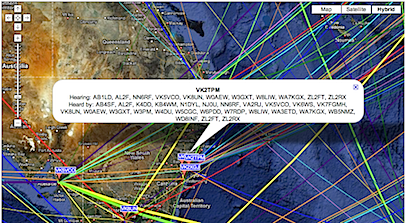 And here's the world. 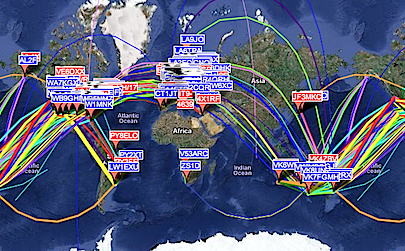 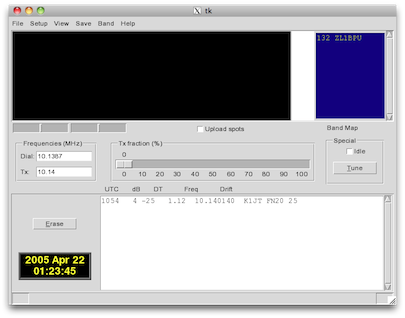 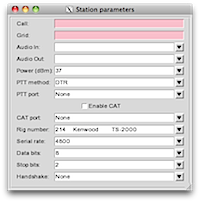 My sincere thanks to the MacPorts users mailing lists for help last night. And thanks of course to Jo Taylor. I'll update when I have some progress to report.
Posted by Peter Marks at 1:51 PM 3 comments:

Did a spot this morning with James Carelton on ABC Radio national where we discussed digital photography and showed a wonderful book about the Golden Lotus Chinese Restaurant in Killarney heights.

For those who've wondered what the guy who does "what the papers say", here's James in the radio studio that's gradually turning into a TV studio. 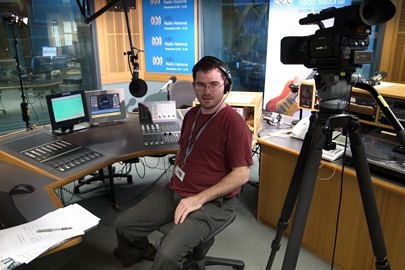 (He didn't really want to be photographed in that shirt but seeing as I was forced to wear a cardigan..)

Thanks to Roi for the filming and post production.
Posted by Peter Marks at 12:47 AM No comments:

Just noticed that if I take a web browser to a non-existent domain name, instead of correctly returning an error as it should Bigpond now directs me to a web page with a Yahoo search. 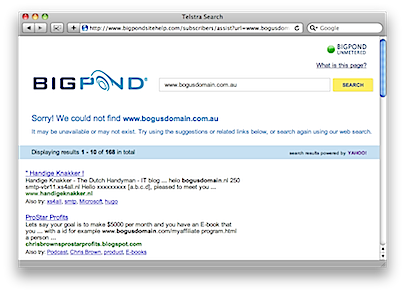 This is called DNS Hijacking and it's very annoying.

As a programmer, I rely on receiving error messages when appropriate and being able to do the right thing in response. These days a lot of software works by sending HTTP requests and if these requests, to perhaps an internal domain, succeed when really they should fail all sorts of bad things can happen.

One solution is to use Google's new public DNS.

Dear Bigpond, please don't mess with my internet connection, or at least let me know about the setting and allow me to opt in or out as I wish.
Posted by Peter Marks at 4:02 PM No comments: 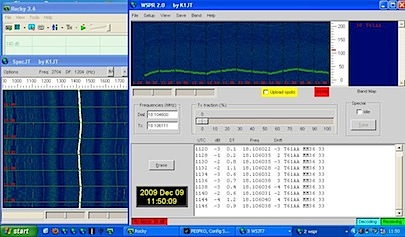 I also subsequently found a simpler SDR Rx prog called SDRadio by I2PHD which, strangely enough, will not work with the Realtek in-built but works fine with the el-cheapo USB - problem solved two USBs and an actaul hard cable cross-connected and Voila! Simple."
Posted by Peter Marks at 9:14 PM No comments: 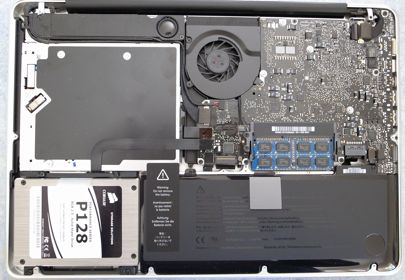 After using this for a week I'm pleased to report that it was worth it. The snappy application launch performance makes it feel like a new machine and will certainly extend the life of this one. Battery life does not seem to be longer in any noticeable amount. It might be that I'm using the laptop more due to the novelty.
Posted by Peter Marks at 8:47 PM No comments:

Dave, VK3ASE, just posted this video of his visit to Herb VK3JOs shack. Inspirational, for me anyhow.

Dallas does an excellent interview with Herb in the latter part.

Thanks Dave.
Posted by Peter Marks at 11:18 AM No comments:

Getting the scientific analysis on climate change

This week I started a lunchtime discussion at work to find out what people thought about the failure of our democracy to act on reducing the "man" made impact on climate change.

It was amazing to find that many regard it all as "just another tax", some sort of plot by government to raise revenue. Indeed one of my colleages sent me a brochure full of wild claims presented in bullet form.

Despite having seen An Inconvenient Truth, and listened to a lot of debate in parliament, I realised that the facts are not at my fingertips.

Two sources stand out, The Copenhagen Diagnosis, and the Intergovenmental Panel on Climate Change. The Copenhagen document is rather fluffy and full of pretty pictures while the IPCC reports, available here, are really excellent.

Full of careful language, extensive peer review, and a range of interpretations.

I highly recommend this. I fear, as my friend Jonathan suggests, perhaps democracy is unable to deal with things like this until we are in crisis.

I've had some interesting direct responses to this little post so far. If I can summarise:

Perhaps what is needed is an alternative paper, with the thoroughness of the IPCC paper, then we could weigh one up against the other by comparing their data and analysis. I'd be most grateful if someone can point me to it.

Right now I'm completely boggled by this mix of politics, science, religion and economics - what a weird conjunction!

Just noticed this on the "conspiracy of the century"...

I've done a lot of reading in the past few days and while there are a few dubious graphs about most of the criticisms are unreferenced or come from dubious organisations.

Science isn't a democracy, but Wikipedia has a great list of well known scientific organisations that have given a view. I do not see any substantial evidence to contradict the statement that "human actions are "very likely" the cause of global warming, meaning a 90% or greater probability". There are limits to scepticism.

If it isn't linked, then I think we should live sustainably any way.
Posted by Peter Marks at 12:31 AM 6 comments: