Peter, VK3YE, was in Sydney briefly and a few of us had the pleasure of meeting up before he braved the enhanced airport security. Stephen, VK2BLQ, brought along his beautiful valve regenerative radio. 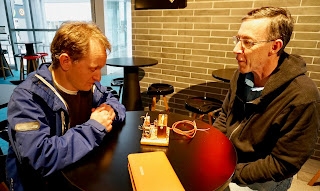 John, VK2ASU, made the journey from Maitland and brought a few interesting projects for inspection including a Tuna Tin radio. 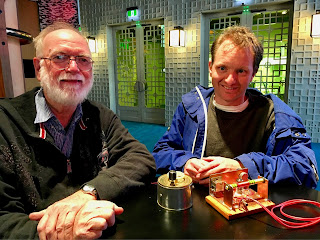 After Peter left we had a duel between John's regenerative 80 receiver and a Tecsun PL-880. 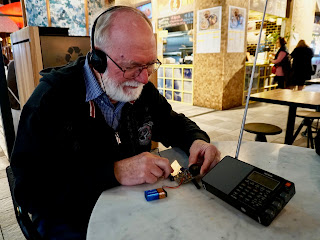 Thanks Peter for popping by. Catch you on the air by the bay or the harbour!

After lunch, John and I walked around Chatswood inspecting cameras, telescopes, 3d printers and torches. After becoming familiar with the prices out of China on Banggood and AliExpress it's hard to take the retail prices of many of these products.
Posted by Peter Marks at 7:01 PM No comments:

I like the little HP Stream 11 laptop but Ubuntu is a bit slow on it so I've recently installed Lubuntu Linux. Based on Ubuntu but with a lighter weight desktop and windowing environment it runs well and does not use the 2GB of RAM available in this machine. 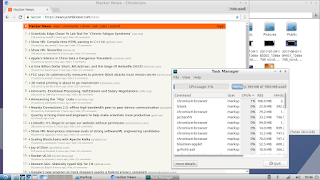 Even with the Chromium browser running there is free memory available.

To find out more detail about where your battery power is going, there's a utility that can be installed with apt, called powertop. 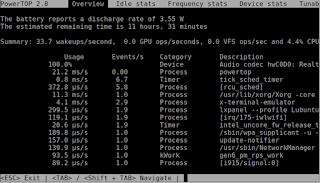 There are a bunch of tunable settings that can be adjusted in Linux to get better battery life, mainly turning on some power management settings, I've turned on each of these and so far so good.

While Lubuntu is fine, I do miss a few things from full Ubuntu such as the ability to search for an app to run it, also the window edges are very narrow and rather hard to grab with the mouse.

I've noticed that some operations, such as 'apt update' hang for 120 seconds before starting. At first I thought this was a DNS issue but it turns out that disabling ipv6 fixes this for me. (Obviously, I would prefer to use ipv6 but perhaps my ISP or home network isn't quite up to it). 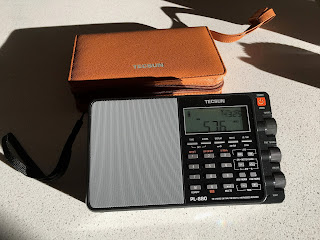 In all a great radio with controls familiar to you if you've ever had a previous Tecsun radio. My favourite feature is the sleep timer that turns it off after a settable period of time at night. High sensitivity, lovely smooth tuning, passable sideband and big clean sound that can fill the room. Recommended. AU$249.
Posted by Peter Marks at 4:50 PM No comments:

My cloud hosting needs are modest. A couple of Wordpress blogs, an OpenVPN server, and a Tiny tiny RSS server. I use Amazon’s AWS services for S3 storage for miscellaneous files and backups using ARQ. When Amazon launched Lightsail with a VPS starting at just $5 a month (for 512MB RAM and 20GB SSD), I moved over from Linode where I was paying double that.

All seemed good at first, Amazon’s infrastructure gave me better ping times than others, but I noticed that mysql was going away from time to time. Tailing the system log I could see kernel out of memory messages and that it was killing mysqld. You see entries saying "OOM". The kernel kills the process that's using the most memory which tends to be mysqld.

My first thought was to increase the RAM but there’s no simple way to do this on Lightsail, you must take a snapshot (backup), make a new instance with the new memory and build it from the snapshot. When all is up the external static address is simply re-pointed to the new instance and the old instance can be stopped. This isn’t at all difficult but it seems like something computer software should do.

After upgrading the RAM it dawned on me why Linux was running out of RAM - Lightsail instances have no virtual memory! It turns out there’s no easy way to add a swap partition and they actually warn that if you did it would be too slow.

Paying $10 a month for a Lightsail instance with zero virtual memory becomes uncompetitive with my old favourite Linode who offer 1GB RAM and 30GB SSD including VM for the same price.

So, I’m back on Linode and frankly happy to be there. Amazon is a gorilla in the hosting game but their offering is incredibly complex and, it turns out, has some little gaps.

I realise my home use is at the very low end but, as the song says, “from little things, big things grow”.


Not having any virtual memory is a major problem for any real server.

Vultr is a new provider of virtual machines that starts (at the time of writing) at US$2.50 per month for 1CPU, 512MB memory, 20GB SSD and 500GB of bandwidth. 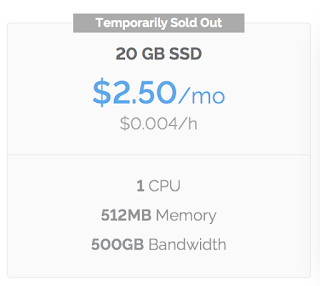 A suggestion from John.

They claim to be faster than competition from AWS and Rackspace and given that I'm in Sydney and they have a location here, I'm going to give them a shot.

Accounts must be topped up before use, so I guess this is pre-pay, but once a first payment has been made they take Bitcoin which is handy.

Hmm, bait and switch eh? It turns out that once you pay them some money, the US$2.50 server size is "sold out" in Sydney... not impressed. By default the Ubuntu image has no swap, like Lightsail, but they have a guide to manually adding a swap file.
Posted by Peter Marks at 5:17 PM 1 comment:

Although it sounds disturbingly like a new rig from Yaesu, FT8 is actually a weak signal QSO mode from K1JT, Joe Taylor, and the folks who gave us WSPR and other modes. The mode is Franke-Taylor design, 8-FSK modulation.

I've just had my first contact with Steve VK6IR who is located right across this wide brown land.

I saw his CQ, received at -4dB, double clicked the line and the rest of the QSO, including signal reports each way, was automated.

Unlike WSPR where each over takes two minutes, the cycle time in FT8 is just 15 seconds so it feels a lot more like you're actually having some sort of conversation.

"New mode called FT8: sensitivity down to -20 dB on the AWGN channel; QSOs 4 times faster than JT65 or JT9; auto-sequencing includes an option to respond automatically to first decoded reply to your CQ."

I kind of wish this was all a little bit more manual and that I could have a few more characters to personalise the QSO. Maybe we need a Twitter like digital mode?
Posted by Peter Marks at 12:35 AM 1 comment: 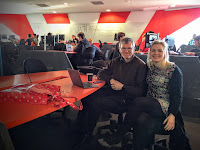 It's GovHack time again! This year it will be held over the weekend from Friday 28th to Sunday 30th July 2017. Back in 2015 I joined a team called "Hackasaurus Rex" with daughter Cat and her boss Ben and we participated at the Canberra location.

Ben brought graphic design skills, Cat did data analysis and transformation (in python) and I did iOS development.

On Friday night we looked at the amazing array of data available and came up with the idea of making an app that lets you check a place to live to see how... "liveable" it is. 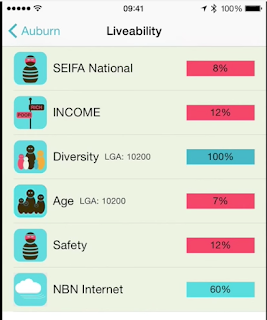 The effort involved grabbing data from a variety of sources, normalising that data into scores that indicated the "goodness" of a location. Some data sets used postcodes and others used suburb names so there was some work required to map these.

While it was freezing cold in Canberra, the atmosphere in the room was warm and focussed. 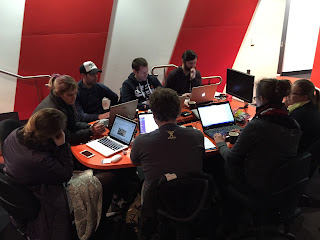 I think having a small team worked well for us and the fact that our skills were all different and yet complementary meant there wasn't much overlap. Our entry suited the iterative development style that a hackathon invites in that we had something working pretty early on Saturday and were then able to add more data until we figured it was time to write up what we'd done and make the video you need to enter:


Making the video does take time and our approach was to make a recording of the mobile device screen first and then record a description which was added as the audio track later. Some teams did things as simple as making a slide show and exporting it as a movie while others made full on documentaries about their entry.

GovHack is a wonderful event, it encourages diverse teams to come together to work with fantastic data from enlightened government departments. The sponsors that get behind it are to be applauded and the organisers do a great job. This year I'm a volunteer and will be hanging out at the Sydney event.

If you're reading this before 28th July, get over to govhack.org to find out more and register. I look forward to seeing you there!
Posted by Peter Marks at 10:28 PM No comments: