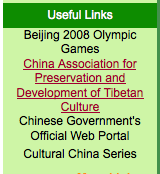 My daughter noticed this, thankfully we are running MacOS X here.. If you visit the web site of the "Embassy of the People's Republic of China in Australia" there is a "Useful Links" item to "China Association for Preservation and Development of Tibetan Culture", sounds very positive.

However, if you're in Firefox, which checks sites with Google to see if they are known for bad things, you see this:

If you click through, Google provides the following advisory:

Malicious software is hosted on 10 domain(s), including..."

(I won't link to any of the bad domains here though).

So, either the site controllers want to install a trojan on the computer of people interested in Tibetan culture preservation or the site has been compromised by someone without their knowledge.

I discussed this on ABC Radio National this morning.
Posted by Peter Marks at 3:32 PM

Such clear communication of complex concepts in such a short space of time gets you extra points.

And good on you and the ABC for being independent enough to clearly recognise that it's Windows that's bug-ridden and there are great free and commercial alternatives.