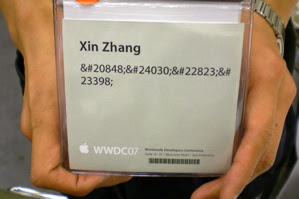 The Apple conference was huge this year. A record of more than 5,000 attendees. Fantastically organised but it's so big that there were queues for everything.
When Leopard ships later this year it's going to be great. I can't wait to see what developers build on top of it.
As always with conferences, I got snippets of valuable information from the sessions, but the greatest insights came from conversations with other developers during breaks. Met a bloke today who builds highly scaleable apps in python which are deployed on Linux for telcos - he explained to me how they manipulate the global interpreter lock so that their heavy lifting threads make use of additional cores.
People came from all over the world, such as Mr Xin above, who assured me that his organisation looked fine on the web form. (From a distance I first thought it was that famous AACS key again).
I've had a hard time with jet lag this year. I seem to be in some unknown third time zone, not San Francisco, and not Sydney. Wide awake at 4am local time.
Incidentally, this is being created using the Safari 3 public beta which seems excellent to me.
Posted by Peter Marks at 6:59 AM

I gave Safari another go and I'm blown away by the speed of browsing. Javascript performance compared to Firefox on my MacBook is incredible.