iPhones on sale in Bellevue, WA 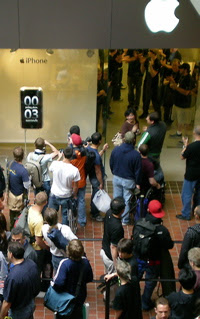 It was a friendly crowd, friendly staff, and friendly security guards.
Other shoppers stood on the level above watching the queue wait patiently as the big iPhone demo screens in the window counted down second by second.
Two minutes out the black paper was ripped from the windows.
As the final seconds counted down the staff formed an honour guard and clapped the eager shoppers as they filed in to plunk down their $500 (plus a two year contract).
This all went really smoothly, but I think the real genius, from a telco perspective, is that these folks just bought the box and then headed home to do all the churning and provisioning via iTunes.
Safari on a big touch screen might be great but having your customers do their contract sign up at home, rather than holding up staff in your store is brilliant. I'll buy one, but not until it does 3G.
Posted by Peter Marks at 11:36 AM

I think we should start queuing at the Apple shop in Chatswood. We'll be waiting for over a year I think.

Ha! We should do it as a joke. Do you think we could get 20 people to start a line?

It might make the point that we shouldn't have to wait so long.