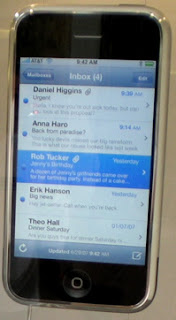 It's Wednesday, two days before launch, and I thought I'd predict the stories that we'll see over the coming weeks and months in advance.
iPhone dissassembled - yes, someone will pull one apart, within hours, and publish photos of the interior.
iPhone screen cracked - someone will sit on their phone and, yes, the glass screen will crack, duh.
iPhone screen scratched - despite the glass surface, folks will carry iPhones in a pocket full of keys or diamonds or something and it will scratch.
Complaints about AT&T's data network - this has started even before release by the reviewers. The iPhone makes people even more aware of how bad mobile carrier data services are.
How to unlock the iPhone's SIM lock - so you can use it with other carriers and take it abroad. I'm sure it's well secured but someone will figure this out. Will it be weeks or months?
Build and install your own software on iPhone - it's running MacOS X, it has a CPU with available tool-chains, people will figure out how to add software or turn on sshd. Hopefully Apple will release some decent tools at least for creating widgets.
Linux booting on iPhone - like on iPods, there's not much real point except to show that if you release hardware, someone will reverse engineer it enough to boot something else on it.
Replace the iPhone battery - it sounds like it worked great when new, but after a year of daily charge/discharge cycles, the battery will lose capacity and folks will want to replace it. Just like iPods, third parties will step up and offer kits or services.
New iPhone features in software alone - but not as much as we might hope. Like the iPods, this is a blank canvas for software to run on, but while there will be a few updates, I think we'll find that we are buying a new model to get the new compelling features every two years.
iPhone versions with more memory - hardly worth mentioning, but yes, within a year there will be iPhones with 16Mb and 32Mb. Here is a platform for showing movies, there needs to be a device with 100Gb.
iTunes on iPhone - you want that song, and you want it now right? You have a billing account with your carrier and an iTunes account. You can buy the tune and download it on the spot. The download will be unbilled by the carrier.
Multi-touch iPod range - all the larger iPods will come out in multi-touch models with large screens. Perhaps the nano will remain as it's such a good form factor and is so physically strong. The big question is will these new iPods have wireless and will they therefore include Safari and email.
iPhone inspired phones from others - already Nokia has re-considered their objection to touch screen phones. Apple claimed to own "multi-touch" but then Microsoft showed their table top interface which seems to work the same way. Yes, we'll see phones that are all touch screen from the others as well.
Stories we won't see
I'm going out on a limb here...
Skype for iPhone - Not in the short term (two years) this would harm the carriers potentially fatally. Imagine if there was an iPhone with a VOIP client and a WiMax modem. You wouldn't need a phone carrier at all.
MMS for iPhone - People are saying it's a missed feature, but really do we need old broken MMS on modern devices. If Safari on the iPhone is the real internet, then email is real MMS. It's time MMS died.
An apology.
Sorry to anyone who was searching for one of these predictions and came across this posting, thinking that their dream had come true.
Let me know what I've missed. I'll put dates next to the items as they come true. Should be fun.
Posted by Peter Marks at 1:10 AM

Though I think you mean GB here

"within a year there will be iPhones with 16Mb and 32Mb"

Also, my guess is the iPhone2 will have another [video] camera, on the other side.

Carriers are dinosaurs anyway. We'll all be using some derivitive of iChat on our iPhones eventually.

No I figure that the flash version will quickly double in capacity.

A new version with a hard drive will come too but my guess is that a fatter iPhone won't be as cool.

iPhone disassembled here and many other places too.

Broken screen on flikr. Replace for free too.

Two more down, Apple announced their own battery replacement program and I see is a site offering an unlocking service.