I've been working on a bitx20 for too many months and have had a bit of a frustrating time getting it going. At last it's in use. 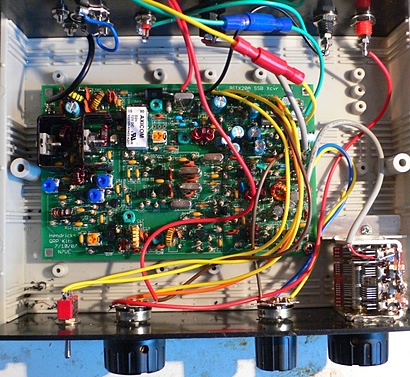 As you can see, I built the excellent Hendricks QRP Kit.

All of the problems along the way are my own fault, and everything is clear in retrospect.

It got a lot of help from the following places:

The main problem I had was that one of the wires from trifilar torriod T6, the balanced mixer wasn't connected. I couldn't null out the BFO and I didn't really know what to expect there. With the help of the Yahoo group I checked and re-checked T6 until it started acting correctly.

The second problem I had was that somewhere along the line, misusing a GDO I took turns off L4 and L6 such that they were way off resonance, this made the receiver work but was very deaf. In the end I visited the very kind VK2ZAY who quickly identified the problem using "math" (as he puts it).

The only remaining issue is that I have a couple of birdies in the tuning range, not quite sure why.

The receiver is sensitive enough to hear band noise, so that's enough. Switching back and forth between the bitx20 and a modern commercial rig the only real difference is the lack of ACG, all the same stations are audible.

I get about 10W out at peak and it sounds reasonable.

The Hendricks kit is excellent and certainly lots of people have built it without issue. The only comments I'd make are that it's pretty dense and if you are having trouble, like me, it's heavy going to trace. The wire supplied for the torroids has the kind of insulation that doesn't come off with heat and I did find it hard to scrape off without nicking the wire.

I called in, inappropriately, on a very active DX net on 14.183Mhz today and John VK7XX graciously took my call and gave me a 5 and S7 report. 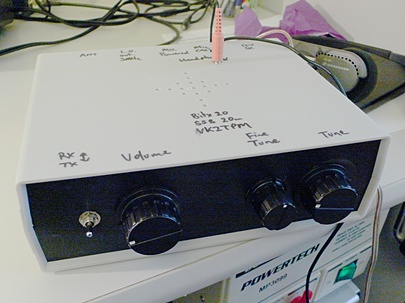 After earlier failing to be heard by VK3EPW I hooked up the cro and a dummy load and saw that with the headset mic plugged in I was prone to RF oscillation. A bit of ferrite around the place has reduced it.

John says my audio is a bit distorted and there's some crackling so I have a bit of work but that's a great result.

Just had a contact with Laurie, VK3AW (in Melbourne) and he also commented on the audio but was able to copy me well and said the signal was very strong.
Posted by Peter Marks at 4:24 PM

Were those bullet connectors in the speaker lead when I had a play with it? I swear I don't recall them!

No I added them so I could remove the lid. You aren't going senile.

In future I'll either use them or put screw terminals on the board, all the wires are a pest.

Also I plan to add a main variable capacitor with a reduction drive - tuning is rather sensitive!

Congratulations. I got my Hendricks kit in Oct 2008 and have built 1/10th of it. This spurs me on to finish.
Regards Richard VK3TXD

Congratulations! Good Job done.
Would you like a feel of home brewing the Bitx Version 3 Now.Hi Hi
All the best
STAY LUCKY