Why ECG isn't enabled on the Apple Watch in Australia

Update: Now approved in Australia.
Recently I’ve experienced some unusual heart rhythms and was referred to a cardiologist by my GP. The rapid beats only happen about once a month and so, despite carrying a 24 hour “halter” monitor a few times, the event hasn’t been captured.

My Apple Watch does notice a rapid heart beat at the times I notice the events so I know it can be detected by a simple wearable device.

The Apple Watch has the ability to record a two-terminal ECG and this feature has been made available in many countries including US, Singapore, Hong Kong, UK and now New Zealand.

The feature is not available in Australia where it must be approved by the Therapeutic Goods Administration. The Medical Software Industry Association, in a submission dated 22 May 2020, mentions Apple and opposes approving their devices to a (presumably) more lenient standard that the competing devices which their members market.

“Apple is becoming a health company along with many other large software and technology companies. The benefit of this are many, but the risk to Australian industry is that if these companies do not have the same imposts imposed upon them as our own Government places on Australian companies, the price signals will prejudice our market. Without question the cost of this regulation would be prohibitive and is avoidable”.

The Apple ECG feature has been approved by the US FDA but it’s interesting to note that they explicitly exclude health software which they call “software as a medical device (SaMD)”.

Not all medical software is regulated by the TGA. Current exclusions include software limited to managing and presenting information such as dosage calculators, software that is a source of reference information for professionals or consumers, software that has a role in diagnosing or managing an illness, and software that analyses clinical data such as results of blood tests or ECG. Note that the software can’t record the ECG and analyse it.

My cardiologist recommended a device that can record a simple two terminal ECG called KardiaMobile that is sold in Australia by “alive technologies”.

The AU$199 device measures the 10mV voltage differential between fingers on each hand, modulates this on a high frequency audio tone and the app records and graphs the waveform. 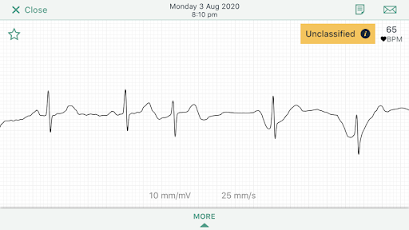 I’ve read that they use audio for the link rather than bluetooth to save a bit of money but this means it needs a quiet environment to work. Recording the audio and zooming in you see this waveform: 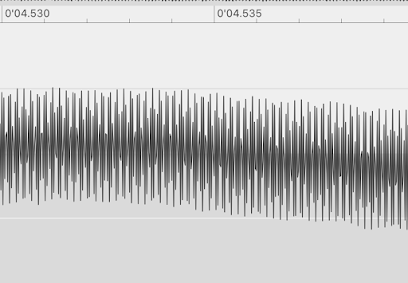 The spectrum shows a big peak at 19kHz:

The app does a little analysis of your ECG, but my cardiologist warned me that it would either say “normal” or “unclassified” which is my experience.

It’s not clear if Apple has applied for approval in Australia but it is clear that there is local industry opposition and because the TGA’s scope is different to the FDA perhaps Apple is holding back.

My cardiologist mentioned that there is a dispute between AliveCor and Apple where AliveCor has been granted a patent for proactive notification of possible heart arrhythmias, further AliveCor worked with Apple to link their KardiaBand device to the watch back in 2017 but subsequently that functionality was built right in to the watch, which no doubt upset them.

The KardiaMobile device is reasonably priced and easy to carry but I would rather just use the watch. There are claims that the analysis Apple does is superior to that of the earlier KardiaBand. I hope that whatever is preventing the ECG function in the Apple Watch from being released in Australia can be overcome soon.

Update: It's possible to enable ECG

It turns out that it is possible to enable the ECG function here in Australia. I followed these instructions, (which involved purchasing some software for $40), and I'm happy to report that I can now record my ecg. 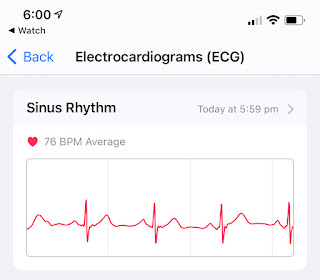 It's possible that Apple might block this method but for now, it's working and I think the trace is better than the one from the Kardia device.

Bad news, after WatchOS updated after the iOS 14.3 update the ECG was no longer working for me after the software trick above.

Update: Rumours that Apple is working with the TGA

This looks promising: "Apple Watch gets closer to TGA Approval for ECG with Approval for Irregular Rhythm Notification".