A few days ago we noticed that the internet was very slow. Pinging Google's DNS 8.8.8.8 showed about 20% ping loss. I logged in to the Telstra Wifi router and used the diagnostic to ping the same address and it also lost packets - so it's not within my network. 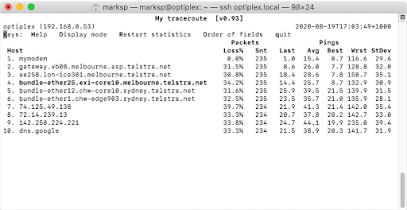 Checking for NBN outages on their status page found nothing.

I checked for any known outages on Telstra's outage page. They showed no known problems.

Next I ran their diagnostic and it seemed to agree that there was a problem and told me to ring a number, commenting that the operator would know what steps I'd already taken.

I powered off the cable router, waited a minute, powered it back on and after quite a long time all four lights became solid but the ping loss was the same.

Ringing the number, I was asked by the IVR to enter my account number, then day and month of my birthday. It asked if the phone I was calling from was linked to the account - it is. Pretty quickly I got on to someone (I guess in the Phillipines), they asked me again for my date of birth and for my name. They seemed to have no information about who I was or what I'd done.

They did some tests and asked for the MAC address of the cable modem. They asked me to turn it off, wait two minutes and turn it back on. I did. Eventually the lights came back on but the ping loss remained.

Yes! there's a fault. An NBN co technician would come to the house the next day between 8am and 12pm to fix my issue. Pretty good service I thought.

A few hours later the fault was resolved and I got a text saying that NBN co have competed further testing and no longer needed to visit.

Not much to complain about except to say that it surprises me that they can count every byte of upload and download for billing purposes but can't detect that the service is suffering major ping loss. Perhaps I'm quicker than the neighbours but I seem to be the first one to report an outage.

Things are back to normal and a trace route looks like this: 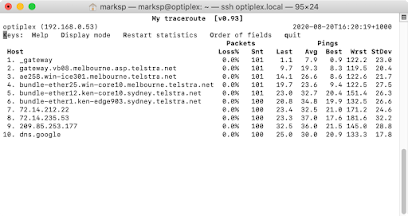 A few more days have passed and an SMS just came in saying that I'll get a $7 credit to compensate for the disruption. 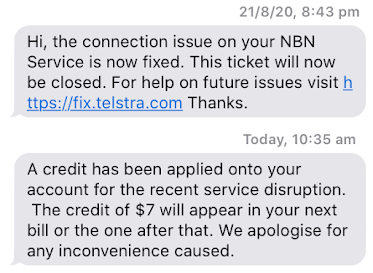 I'd guess that win is Windsor exchange. And ken is probably Kent st exchange.

Mal is on the money. No idea what 'vb08' denotes however