Last Friday I watched an excellent presentation given at the EMDRC by old friend Chris Long, VK3AML. You can see it here:

EasyPal is software for Microsoft Windows that lets you send images and other files over an audio bandwidth link. The image is sent in digital form over an OFDM modem similar to that used for Digital Radio Modiale.

Here in Melbourne, a group of enthusiasts have been given permission to perform tests on the VK3RML 2m repeater on Thursdays from 9pm. Here's an image I received: 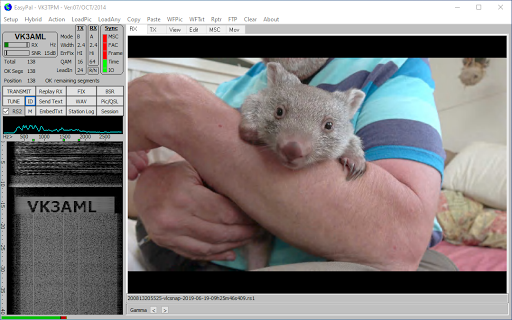 The software is a little weird (to my eye) and rather technical but I was able to get it going and both send and receive images.

Getting it working over the FM repeater seems mostly about not overdriving the audio when transmitting and Chris suggested I switch from the defaults to QAM 64 and Mode A to get faster transmission over the reliable FM link.

This is a great feature, the ID button sends your callsign in a way that displays on a spectrum waterfall. 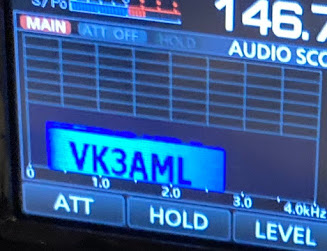 My radio, a recent Icom rig, was not in the list of supported CAT devices and the latest version of EasyPal is dated 07/Oct/2014. I found a description of the hex codes to paste into the configuration screen on a Facebook page but it had a side effect of disabling my microphone! (In the end I had to reset the radio to get it working again).

Why no updates for six years? It seems that the author, Erik, VK4AES, died in 2015. Ironically, EasyPal came about when he lost the source code to an earlier version in a lightning strike near his home and had to start again. Erik, it seems, didn't like to keep copies of source code off site and I fear that EasyPal's days are numbered unless it can be updated.

There is similar software for unix computers with Qt support. QSSTV 9.4.4 was last updated in August 2019. Conveniently, it can be installed with Apt on Debian based Linux distributions. QSSTV is well documented and supports DRM modes including Mode A and QAM 64 which I used on EasyPal. 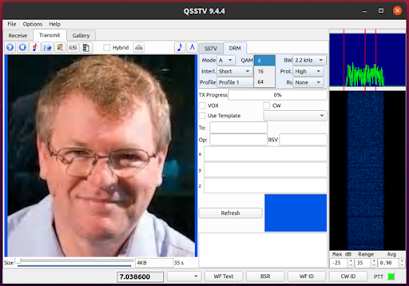 Will they interoperate? I hear that Terry VK3FTJS uses QSSTV on the Thursday contacts and says it's better at digging a signal out of noise than EasyPal.

So far, I've only been able to decode one transmission with QSSTV and I suspect it was sent with QSSTV. I've been recording the contacts on the repeater and pipe the audio over to EasyPal on Windows using VB-Cable which works well playing the audio in Audacity. 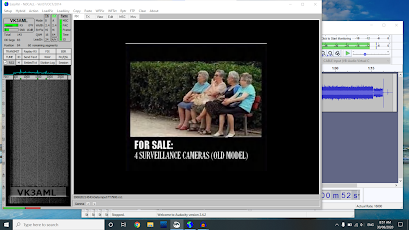 Excellent writeup. Another fun thing you can do with easypal is have your callsign (or other text) in the waterfall window at the start and end of your transmission. There is also the ability to only send waterfall text or even low quality images on the waterfall.