Fedora 10 with the LXDE window manager has been a pretty good experience on my Acer Aspire One netbook but the release of a new Ubuntu with a "netbook remix" prompted me to give it a go.

This time I decided to install via a USB key drive, it's a very smooth and quick experience. The .dmg image file is downloaded, then (I'm an a Mac desktop here), the image is simply copied over to the USB key using good old unix dd command. In my case, like this:

Booting is snappy, 37 seconds from power on to login screen. Probably five of those seconds are in the bios and grub's deliberate delay.

Aside from hardware support, wireless, video and sound all just worked out of the box, the big feature is that the user interface has been tweaked to be usable on the netbook's smaller screen. 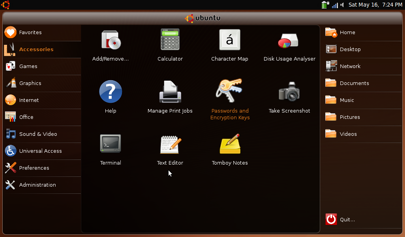 On logging in you get launcher shown above, with a menu of programs on the left and folders on the right.

When you launch an application, it kind of looks like it's running in a browser tab, kind of weird but it makes sense on a small screen. You can switch to the conventional blank desktop in preferences.

Wireless comes up very fast, much better than under Fedora on this hardware.

The graphics look lovely and fonts are now first class - this used to be the thing that really made Linux desktops look second rate. There are various little animations, such as when applications launch, these are nicely done and not overused. A couple of icons are low resolution, but otherwise all looks good.

Special keys on the Aspire One such as Fn-Volume and screen brightness work as advertised.

Shutting the screen puts it to sleep quickly, on opening again, just tapping a key wakes it up and wireless re-connects smoothly. I've had trouble with this on other distributions.

I ran Firefox and was prompted to install a flash player, it offered three alternatives, the first being a Gnome flash player called Swfdec. This install failed. I restarted Firefox and tried the third option, the Gnash SWF Player. Again, this failed. The third option, the Adobe Flash player failed saying "Could not find package "flashplugin-installer". Tried to find flash in the Synaptic package manager but couldn't see it there. Hmm.

Network browsing is excellent, it showed me all the macs, pcs, linux boxes and even a shared drive on my router. Double clicking on the icon for my mac, showed that it was using ssh to connect and wanted confirmation on the key. I logged in and could browse the disk via sftp. Great stuff, and all transparent to the user.

When setting up printing, it scanned my network and found both printers. When I chose the HP LaserJet it offered to download a proprietary driver which would "enhance the functionality" by making printing faster. I said yes but it didn't do anything, possibly because in the mean time the Update Manager had noticed some software updates.

The software update came to a halt for several minutes showing a terminal and saying it was installing a new version of a sound config file while "Configuring gnome-applets". In the end it carried on.

On rebooting after the software update, wireless didn't re-connect. I shut down, figuring that maybe the card was in a bad state but on starting up I found in Administration/hardware drivers that the "Alternative Atheros "madwifi" driver" was disabled. I enabled it, rebooted, messed around, edited interfaces deleted, rebooted... In the end I disabled the proprietary driver.

Now I can see my network again, but couldn't join it.

Ubuntu 9.04 netbook remix is an excellent release but at the time of writing has wireless problems after a software update. After a few more re-boots it connected again but there is something strange going on.

Wireless seems ok now but the fan was running all the time so I've installed acerfand and created an file called acerfand in /etc/init.d based on skeleton.

Despite all this, it doesn't seem to be starting on boot.

OK, the correct solution to the excessive fan on an acer aspire one is a kernel module acerhdf.

Now I discover that to pass parameters to the module used to involve a line in /etc/modules.conf but that's moved to /etc/modprobe.d/options.conf

I inserted this line:

It's working and in /var/log/messages I'm seeing:

(Yes, I'm going to turn down the interval).

I went to System - Preferences - Appearance and selected Extra. (I normally run with None - this is a netbook, don't forget).

Anyhow, I played around with wiggly windows for a while but didn't see a crash.

Can you give any more information about what triggered the crash?

the problem is with compiz (ie. using extra) when you are going to be running the netbook remix you need to have it set to none.

My problem is strange, I tried ubuntu 9.04 remix keeping windows xp on the machine, and grub would let me decide which one to use (it defaulted to unbutu.) OK no problem, but after a couple pf days it would not boot at all. Grub would not even come up. It would give a short message (to fast for me to read it sorry to say) and give me a blank screen. I uninstalled it and let windows back in again and tried it again same problem after a couple of days. I now have only ubuntu on the machine but it does show a windows xp but that is the recovery partition. Any ideas of what to do. I kind of need windows for my class which there web page does not work in firefox in ubuntu.

Gosh Mike, I can't imagine why it would work "for a couple of days" and then lose grub.

If your XP recovery partition is still there I'd try the recovery process and get it back to original condition.

Failing that you could do as I have done and download Windows 7 FC and use that until it times out in October 2010. Seems to run pretty well except for the fan.

I've never struck a non-working mouse. I'd watch the syslog when you plug the mouse in to USB and see if there's any errors.

Hi,
I have Acer 4736G Laptop, i tried installing Ubuntu Desktop version, but microphone did not work at all, though i tried everything I could, including upgrading the Alsa mixer. So, my question is can I install Netbook Remix on normal laptop ? Is there any known sound problems on this verion of ubuntu ?

but i don't have a cd drive on my notebook. what do i do ?

It's possible to make an ubuntu installer on a USB key stick and boot from that. Of course there are USB CDROM drives around.