Been experimenting with simple wire antennas and I've just built an Off Centre Fed dipole (OCFD) as described here It looks like this:

I don't have 27m of free space so that leg goes up to a tree and then hangs down in an inverted L arrangement. (The co-ax if standard 50 ohm).

Using an MFJ-269 I've plotted the SWR against frequency as follows: 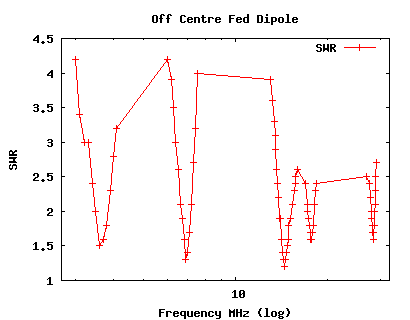 The dips in SWR are at:

So 80m is spot on, 40 is slightly low, 20m is a bit high, and 10m is good. Note that I made the measurements close to the balun rather than at the end of a long co-ax run.

Interesting antenna that gets just a tiny mention in the ARRL antenna handbook but no detailed information.

I'll report back after some on-air tests. So far I'm hearing stations in New Zealand and North America very well, noise is also up but it's very hard to tell as conditions vary wildly from night to night.

Just had a contact on 20m with Eric BV4VR in Taiwan so I'm certainly getting out ok.

The graph was drawn with this gnuplot script:

The XRF-4 balun seems good, it looks like this: 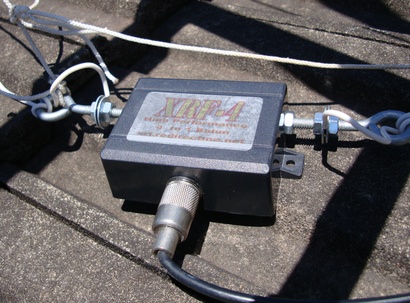 It's well constructed with a different style of wire termination to what I've seen before (squash the wire between washers), it will be interesting to see how it degrades in the weather - I think I prefer the circular lug style connections. I would welcome an anchor point on the top to hang the balun.

I've just received a commercial 4:1 balun, the XRF-4, and so the plot above is updated with that. Below is the original plot I posted, it's interesting that this plot is rather different from my home brew balun on a ferrite rod.

The wire is perhaps 3cm shorter than before but otherwise the only change is the balun. 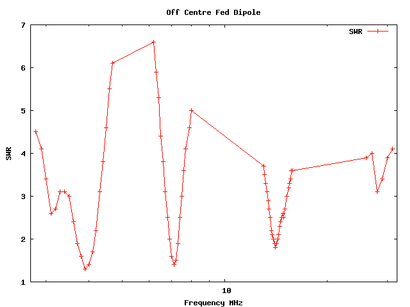 The dips in SWR are at:

The Off Centre Fed Dipole seems like a very versatile antenna for covering several bands, don't forget that you need a 4:1 balun.

After living with it for a couple of days I've reverted back to my old arrangement of a 40/80 trap dipole with a 20m dipole connected to the same balun.

For me, the OCF dipole is significantly noisier than the standard dipoles particularly on 80m probably due to the fact that it's much longer and had to hang down to within a metre of the ground, compared to my normal dipole which is about 10m up at one end.

It's been a very interesting experiment though.
Posted by Peter Marks at 11:04 PM

I would like to know where I can buy a XRF-4 balun.

the maker's site is herethere's a link at the bottom of that page for ordering.

From experience, for top-flight baluns, you should visit G-Whip (Geoff Brown's) site. Built like tanks, brilliant. Most of his seem to be voltage types, though. Current baluns appear to be a more logical choice. Those are very easy to make, also.

Hi, F5VHZ here, i have three Windoms all with similar baluns home made, and have them spread in three different directions, W1, pointing towards the west, W2, pointing north by north north west, thats aimed at dublin, and the latest W3, pointing north east over norway sweden russia and down to japan.
Its a luxury having three, but switching between them you can pull in a 57 up to 59 plus 10db by having one in tbe best direction. All three show similar traits, some good and some bad. All 3 are used with no ATU, and at their 40m overall lengths give excellent performance on 40, 20, 15, 10, and 6 meters. But the dip on 40 is at 7.01 and runs up to 2:1swr at the top end. Also 80 meter band is high swr, and too low on the band for phone.. So what conclusions can i draw... Well over very good ground that i have, they tune up (by trimming lengths) very similarly despite one being over a tin barn roof. At 8 meters above the ground. Their radiating lobes with nec4 show their broad spread patterns, and this is confirmed in my results, more research and experimentation is required to get 3.55 7.1 nd 18 mhz where i want them at near 1:1 as possible, so a vna is on order for some seriouse research, but there is one very important result thst you ought to know.... All three antennas are fed with 11mm coax, but one is 75 ohm double screened 11mm coax, and this antenna has very similar swr but clearly has a tad more gain. Also listening to signals on three different orientations, the chrispness of the tonality changes slightly... This is directly related to the angle of the incoming wave to the wire. (im using 1mm dia wire) and this phenomenon is not audible unless you have several windoms built identically... I imtend to publish more info on my qrz page but you can see how the baluns are wound and any research being carried out. What do i think about the Windom? Its the best multiband antenna for gain, discretion, and low cost, out there. Easy to home build, and still open to some further research... So why wouldn't you want to make one?. If you want it for 80 and 40 it can be trimmed accordingly. And you can use either 50 or 75 ohm coax... With the 4 to 1 balun.
F5vhz

I think we're talking about the same antenna. Unless I'm mistaken (quite possible) a Windom is another name for an off centre fed dipole.