Today at the ARNSW Home brew group, I presented a talk about FreeDV and codec2. Feeling unqualified to talk about how codec2 works, I wrote to David Rowe - the author of codec2 and last week we met up in Sydney where I interviewed David on video and that conversation is included in my talk.


Codec2 is an exciting new low bit rate voice codec that is open source. It is particularly suitable for digital voice over HF radio.

Thanks to Peter, VK2EMU for asking me to speak, John, VK2ASU for videoing the talk, and of course to David Rowe for taking the time to answer our questions on codec2.

Here's just the interview with David without my prattling on before and after:

Posted by Peter Marks at 4:53 PM No comments: 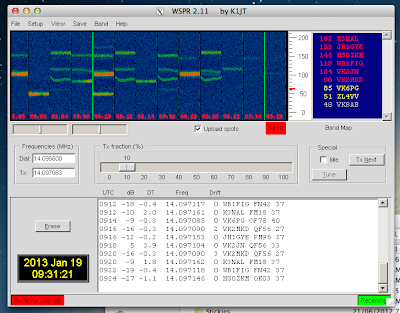 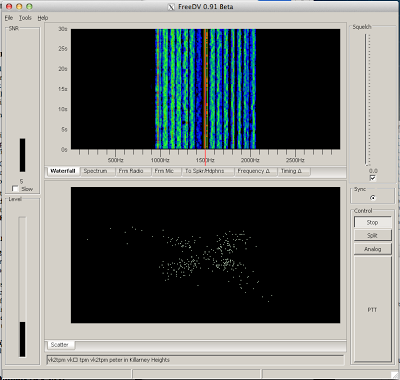 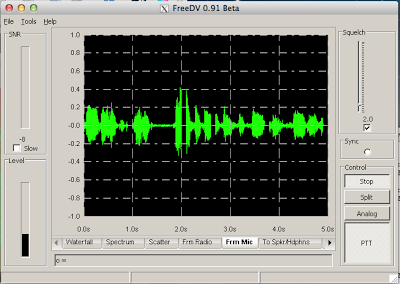 My opening remark gives the wrong impression, there's actually great Ham Radio software for MacOS these days. Machamradio has a great list.
Posted by Peter Marks at 6:52 AM No comments:

This morning VK2JI relayed the Sunday broadcast via digital voice using freeDV. Here's how I received the signal on 7190 from the Central Coast of NSW (I'm in Sydney).


Earlier in the broadcast: 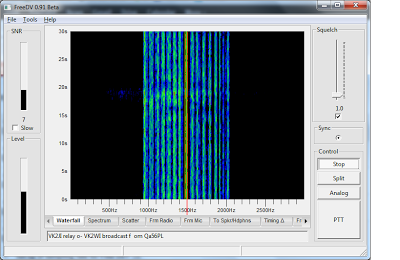 There is discussion of all this on the digitalvoice google group.

Here is Ed's video of the transmit setup.

Upgraded to Bigpond Extreme, getting 80Mbps

We aren't on the three year plan for the NBN so I decided to go ahead and upgrade our cable internet to Bigpond Extreme.

Here is how it was before according to speedtest:

And here's how it is now:

So, oddly, ping time is slightly worse from 6ms to 9ms, but download speed is noticeably better going from 26Mbps to 80Mbsp. The experience of loading a web page is very nice indeed.

We no longer have a land line so we pay $110 per month and get 200GB of data. Incidentally, we've just installed a Skype phone - one that doesn't need a computer - and it seems to work very well.
Posted by Peter Marks at 6:06 PM No comments:

I'm trying to connect a SIP VOIP device VK2ASU kindly passed me to pennytel but it won't register with them. The device's web interface doesn't give much information but it does have the option to send logs to a syslog server on your network. I've figured out a very simple way to run up a server for temporary use using netcat.

This gets nc to listen to UDP on port 514 and it displays whatever comes in.
Posted by Peter Marks at 3:12 PM No comments: