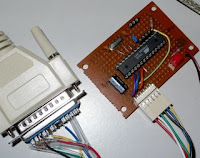 I've also changed the fuses on a chip so that I now get "avrdude: AVR device not responding", still trying to figure out how to get out of that issue.. All good fun.
Posted by Peter Marks at 2:04 PM