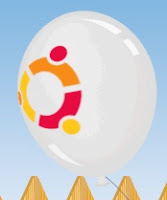 Grabbed the new Ubuntu 8.10 desktop edition and gave it a whirl this morning.

The install is very easy, somewhere between Vista and MacOS. It would benefit from Apple's approach of firstly just showing the top ten countries or languages rather than showing every one in the world - but I'm sure others would disagree.

The install was completely smooth except for when it stopped at 83% saying "Configuring apt" was "Scanning the mirror". While it was hung I searched around and found that I'm not alone with this problem. After, I guess five to ten minutes, it continued but I read that unplugging your network during install makes this time out faster.

Presumably it's due to the software servers being overloaded today.

Notes:
I could totally do all my work in this environment, there's a ton of decent software available.

Visually, there's something strange about Gnome, everything just seems a bit big and spindly to me. The fonts are not quite right - now I'm coming from a Mac so that perverts my view a bit.

The "Normal" visual effects are cute but I don't like the way new windows start huge and zoom down to their place on the screen as they appear. Is this supposed to represent them coming from behind me? The "Extra" level effects make windows behave like you're holding the corners of a wet face washer as you drag. Dragging down gives the impression that the window is made of rubber and squashes a bit. Hmm.

There is still a lack of consistency of keyboard commands in Linux. Not all applications quit with Control-Q for example, and when using the terminal I miss the genius of having a Command key in MacOS that doesn't get sent up the line.

Sound device management still seems a bit of a battle ground on linux, there are two sound systems OSS and Alsa and the automatic detection sends system sounds out to my external USB radio modem, which is a bit of a pity..

Aside from the unfortunate glitch during install, the Canonical Ubuntu folks deserve high praise.

Ubuntu is particularly ham radio friendly, there is a great collection of software available in the Synaptics package manager. I always grab the excellent fldigi for my psk31 activity, I am happy to report that wsjt installs and runs without issue.
This sort of competition is going to keep both Microsoft and Apple innovating, for example check out this eye candy:

Thanks for the tip about unplugging the Network Cable, it worked like a charm!