Hands on with the new brick MacBook 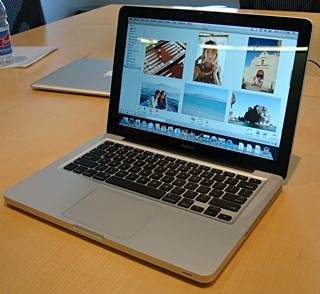 Today I was fortunate enough to get some quality hands-on time with the new Apple laptops.

You need to remove that plate with a very small Philips screwdriver to install RAM.

The battery cover runs the full width and when it's removed the hard or solid state disk is fully exposed and can be removed with one screw.

A neat feature for public places is that when a Kensington lock is in place, the battery cover (and therefore disk cover) locks too.

The black surround on the shiny glass screen does look good as it does on the iMacs and iPhone, bring on the day when the range is consistent.

I have the Air with the shiny screen and don't have a problem with glare from it but I know some people do. The coating is polarised and absorbs some light, further the LED backlit screen goes brighter so I think this is more of a personal preference.

The trackpad is said to be glass but it has none of the characteristics of that material. It's matt, like before. The main difference is that Steve has removed one more button and the whole pad is hinged from the top edge so you click by pushing along the bottom, pretty much like you do now even though there's no separate button.

There is a preference where you can get a right click by tapping in the bottom right region (as well as the old two-finger tap).

To click and drag, it's best to continue to use a thumb to hold down the button and a finger to drag. Possible to use one finger for both but difficult.

The gestures, such as four fingers sweeping up to "clear the desktop" using expose work really well although I didn't like the four to the right app switching so much - it puts up the row of running app icons and then you have to point at the one you want.

I'm tired of all the different variations of Apple video connectors over the years so I was dismayed to see yet another one. Surely DVI was the standard to go with?

It turns out that the DVI spec hasn't adopted a small version suitable for laptops so Apple's version isn't used on anything else. DVI also doesn't have enough bandwidth for very large screens so Apple was forced to use two DVI ports.

Display Port is now a standard managed by VESA and the mini plug has been submitted for standardisation. Let's hope some others pick it up.

Interestingly Display Port can change the signals sent over it's pins so if you plug in a DVI adapter it actually sends DVI signals rather than doing any conversion.

This was a surprise as Apple was a member of the Blu-ray Disk Association. When I asked about this the explanation ran: you wouldn't want to watch a movie as it would be wasted on the small screen, and no one backs up that way anyhow - they all use Time Machine.

Maybe blu-ray has come too late and we'll all just download 50Gb movies from shops on the internet, no wait, we can't do that in Australia as our data runs out at 25Gb...