I took the easy path building the uSDX transceiver by ordering a board to build on but master home brewer, Stephen, VK2BLQ took the harder road and scratch built his. It is a thing of beauty (click to enlarge): 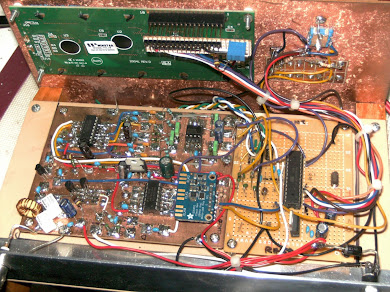 He has sent a report of his experience so far.

"The progress so far with the scratch built uSDX as most of the parts were in the parts box or already existing.

The computer doesn't have Paint, sorry no labels on the PCB but I think that you can see the components.

The chassis and front panel were for a project in the works and merely redirected to the uSDX so the pots are redundant unfortunately the large LCD has no back light. 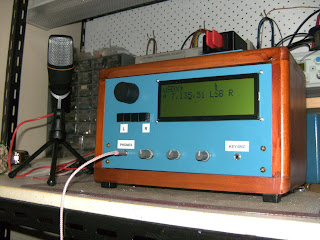 You can see the micro-controller board  that has little on it, just the chip, 20 MHz crystal and resistors.

The demodulator section uses the 74HC4053 created by Tasic YU1LM (DR3 series) and Miguel PY2OHH (#195). Since then, PY2OHH has incorporated this into his USDX Nano version.

It proves the concept, but has quite high conversion loss so would need a RF amplifier, the original FST3253 is much better and I wasn't going to waste the only one I had.

perhaps even Class C would still work providing there is  a tuned amplifier, linear amplifiers would work too, but defeats the purpose of the design.

I don't comprehend  the magick that creates SSB from the 328P and the phase shifted CLK 2 of the SI5351, but it looks to be some sort of gate modulation of the three BS170 FETs. That extra FET I don't think actually worked properly anyway. You might see that there are only two FETs, as I blew up  the other three, and the filter is a simple PI.  Avoided is the tuned Class E  and band pass filter as there wasn't enough room.

Building the demodulator board was little more than a direct conversion receiver and tested OK with a couple of signal generators and a CRO.

Your eyes are better than mine so I didn't modify the SI5351 board and just plugged it in, maybe for Morse it will be fast enough.

The first sketch used was 1.02 ver e loaded into a normal older Arduino Uno displayed signs of life on the 20x4 lcd. This meant the LCD would work, thereupon it was transferred to the receiver board. There were are couple of problems due to "Murphy's whiskers" and bad solder joints but did receive in a fashion. Fixing the faults and loading ver m was a vast improvement. The added functionality with the morse keyer and demod during sending and receiving is a real plus.

The next version needs a bit of a rethink into layout. I would be interested if any really smart people can pare down the sketch to make it suitable for use by a 16 MHz Arduino Uno board, perhaps not SSB or elaborate display. The whole project is super clever and could be good for the current generation of homebrewers.

As you know, the project isn't over until the cabinetry is done, so it gets a wooden box, which got a bit warped before the glue dried and is out by a millimetre or two which is a pest. The spray on stain took a while to dry and dribbled a little, next time use a different stain.

Any way, that is my adventure  with the uSDX,

Great stuff Stephen, I am in awe of your home brewing skills and persistence.