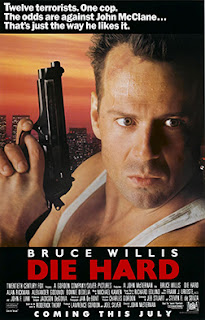 Prompted by a mention of “Die Hard” as a classic Christmas movie, we watched it again on Christmas night. The 1988 action movie it holds up really well and I recognise many of the action sequences that have been replicated in later movies. Jumping off a ledge held by a fire hose turns up in both The Matrix and again in Atomic Blond.

Action hero John McClane is troubled by his poor relationship with his wife due to the fact that she’s pursued a successful career as an executive on the West coast, while John works as a New York police officer with some issues with authority.

Our hero fights multiple “terrorists” led by unemotional Hans Gruber while running up and down in the building. John is progressively broken down through this battle, leading up to a scene where is is pulling glass from his bare feet while talking on a walkie talkie to a friendly local police officer who he asks to pass on is, previously unexpressed, love for his wife.

The building represents McClane’s mind. After the initial attack he goes up a few floors to think about how he should handle the emergency. He even carries out a dialog with himself, as might a consciousness, trying to rationalise the situation.

The various terrorists are archetypes in his mind. They speak another language, and are therefore not clearly understood by John, who must fight them. The leader is Hans Gruber, an unemotional, super rational, archetype who in a penultimate scene continues to hold on to McClane’s wife until he falls to his death. He holds her by the “hands” (Hans).

The terrorists are not really terrorists, they are simply sophisticated robbers, driven by money, and I think in defeating them John has overcome his focus on what financial success he or his wife has achieved and finally been able to express his emotions.

The building, as indeed any skyscraper, might also represent McClane’s penis and the additional clue of two FBI agents both called Johnson (a common penis nickname) is a rather curious joke but suggests that someone is thinking along these lines. McClane’s marital estrangement might have been triggered by impotence due to his inner turmoil over his wife’s financial success exceeding his own.

McClane is often seen running up and down floors in the building. The top is presumably consciousness which is linked to the outside world where, in theory, helicopters and rescue him and the hostages.

The tables are turned in John’s favour when he drops explosives down a lift shaft and blows up deep in the unconscious.

There is inner turmoil in our hero’s mind but attempts at external help, perhaps from therapists, are ham fisted and either turned away or just make matters worse as they refuse to take John’s calls for help seriously. The only person to get through to him is the local, west coast, cop who takes him seriously and does little except be there for him. There are references to “typical California” where things are a bit hipper than they are in the east and perhaps finding this sole mate is John’s bridge to defeating his inner demons.

It’s possible that the whole story is actually a dream experienced during the flight back to the family where McClane’s unconscious is trying to help him to heal his trauma and get back with his family.
Posted by Peter Marks at 10:46 AM