I noticed recently that Sony is pitching their music players by arguing that it's annoying to listen to music on a phone that's constantly distracting you with messages. There's something in that and I recently purchased a single purpose AU$52 Benjie S5 music player from Banggood. 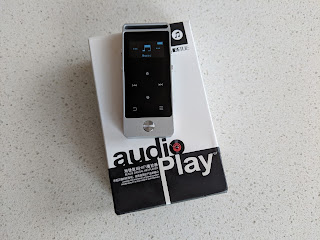 My unit arrived in Chinese language mode. To change it press the “back” icon (bottom left) until you’re at the top level menu which has square icons in the middle. Roll through the top menu items until you see one with a torso of a person in a square. 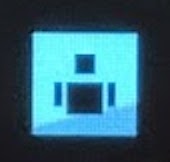 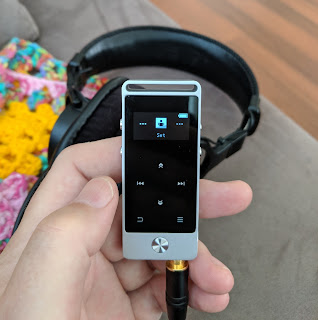 The device is a little slow to respond to button touches or presses so tap and wait a bit before trying again.

On the left side are the volume up and down physical buttons. Mine arrives set at full volume, which is quite loud. Below is a micro SD socket. The card goes in with the front of the card facing the back. I found it a little hard to get it to lock inside the socket but it did after a few attempts.

On the right side is a hold switch that suppresses all buttons when in the up position. Power button tap turns off the screen, long press to power off (it counts to 3). Long press the power to turn the unit on again. The small hole on the lower right side is to reset the CPU if required.

On the bottom is the 3.5mm headphone socket and micro USB socket for charging and file transfer.

Front panel touch area has up, down, left and right. Below is back and menu.

The round physical button on the front is play / pause and is also used for selecting items in menus. 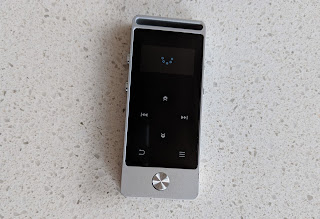 Plugging the USB into a computer shows a menu on the device defaulting to “charge and transfer” or just “charge and play”. If you let it default of choose the first option the device mounts on your computer as a USB storage drive. If you have a micro SD card plugged in it also mounts. When I ejected one, the other was unceremoniously ejected as well.

After adding files either by USB copy or via micro SD card the unit offers to index the files and creates a database of Songs, Artists & Albums. I simply dragged a large collection of music folders from my iTunes library over and so far everything seems to play.

I am using a 32GB micro SD card for music. When you go into the Music menu the first time after inserting a card the first items show you the music stored on the device, to get to your card scroll down and go into “Cardfolder”. It will ask to “create list”, say Yes. It takes a while but when done lets you navigate by Song, Artist or Album from the top of the menu.

Note that the device comes with three tracks with Chinese names that sort to the top.

In the RM Radio menu, press the menu button (bottom right) and get it to auto-tune.

They say it does this. I haven't tried it.

Build quality is good, the unit has a very solid metal frame and presumably could be tethered to a bag by the metal slot at the top. The OLED screen is clear but a little short for many artist and track names. The touch buttons work well but do respond slowly.

Sound seems crisp and clear to me. The supplied in ear headphones are not as bad as expected and it drives my Sony MDR-7506 phones very well. Bass is more pleasing when using Sennheiser HD 212Pros. There is various equalisation settings available but I prefer to run without.

With 3,600 tracks on board it's time consuming to get around, there's no search. Takes me back to the players that were around pre-iPod. It's a pity that the touch controls on the front don't have some sort of scroll bar capability.

Weirdly, mine arrived with an international to Australian mains power plug adapter. No need for this as it charges from USB (came with a cable) and no mains power pack.
Posted by Peter Marks at 2:08 PM