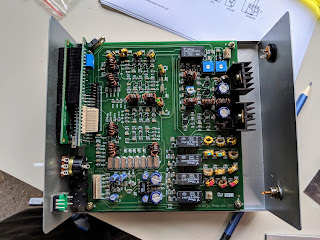 The brand new uBitx from HFSignals is sure to be a major success. Following on from the terrific Bitx single band transceivers, this new design covers multiple bands from 3-30MHz and offers 10W output.

For US$109 you get a fully built and tested board and the sockets and controls. There are plug-able connectors so when you wire it up the board can be removed if required.

I managed to fit mine in a standard 184 x 70 x 160mm case from Jaycar catalog number HB5446. It's a bit of a tight fit but works well. The regulator on the display/CPU board needed to be bent a bit but all works nicely.

Here's how it arrives in the postal box. 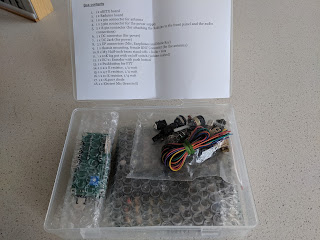 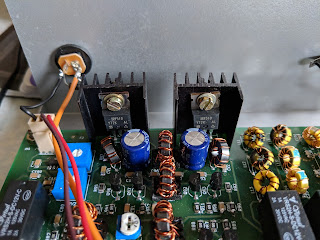 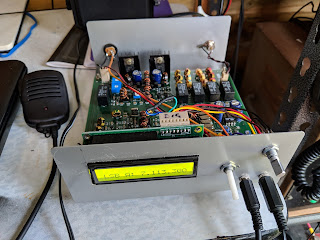 Tuning around 40m shows that it receives down to band noise as well as a commercial rig. Transmit audio sounds pretty good but I'll get some more comments after some contacts hopefully later today.

I'm getting only about 4W out on peaks but that might be due to low audio from the microphone I'm using.

The accelerating tuning action works really well and it's great to have a proper rotational encoder rather than the pot scheme that was used on the BitX.


Tonight I was able to participate in the ARNSW home brew group net using the uBitx. Here's a clip.


This radio is clearly great for modification and the Bitx hacks site is the place to share ideas.

I've been struggling a bit with low RF output on SSB due to low mic audio. It seems that the supplied electret mic has excellent output even compared to other identical looking ones. In the end I swapped out the insert in a hand mic for the supplied one. The hand mic didn't have a hole for me to talk through so a drill has been used to help audio in that was as well.

It's paid off and I've just had a VK2 to VK7 contact with VK7DIK who reported me as readable 5 but not strong.
Posted by Peter Marks at 2:36 PM