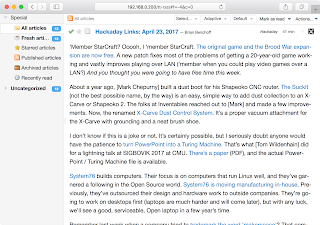 I still miss Google Reader which went away in 2013. It was an efficient way to catch up on all the RSS/Atom news feeds I subscribe to in a web browser.

The key feature I need is that whatever I use remembers what I've read and can be accessed from multiple devices that stay in sync.

When Reader went away I subscribed to FeedWrangler which works well but lacks a decent web interface so must be accessed from a macOS or iOS app such as Reeder.

Recently I've installed Tiny Tiny RSS, also known as tt-rss on a Fedora linux computer in my home network. The installation guide is good but I ran into a few things that were not right on Fedora 25.

I chose to use mariaDB (mysql clone) as the database although they recommend Postgresql.

From memory, the issues I encountered were:


To get my feeds imported, I exported the OPML file from FeedWrangler and imported it into tt-rss by going to Actions, Preferences, Feeds tab and there's a long horizontal panel called OPML that's a button for choosing the file to import.

The user interface is nice and clean and I particularly like how it responds to up and down arrow keys to roll through the stories in the scrolling panel.


The authors suggest leaving a process running to do the updates (it sleeps periodically) but I prefer a cron job as follows:

Anyway, so far I like it a lot and my plan is to eventually move it to a virtual server in the cloud. It looks like you can aggregate all of your unread items into a new feed and presumably read that from an app while out - this could possibly replace the commercial service I'm using at the moment.

The Old Reader is a wonderful alternative if you're looking to avoid running your own hardware. Decent free version and it's modeled nearly feature for feature after Google Reader.

Feedly is working for me --Tony