As a mobile app developer specialising in iOS I get a lot of comments from Android users to the effect that as there are now more android devices in the market than iOS devices, apps should be made for Android first or at least made for both at once.

There is no doubt that there are now more Android devices in the market. But does that mean that the extra effort (yes really) is worth it in terms of the usage an app would get?

How big is the "Android" target market?

Android is a fragmented market. Not only are there many screen and resolution sizes, there are many versions and not all are easy to develop for. In fact it only makes sense to develop for version 4.1 and later if you need to use modern features. This chart from Google illustrates that the actual interesting Android market is quite small. (These are from March 2013). 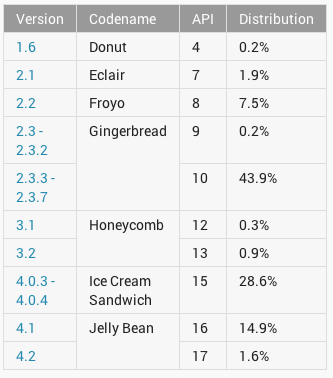 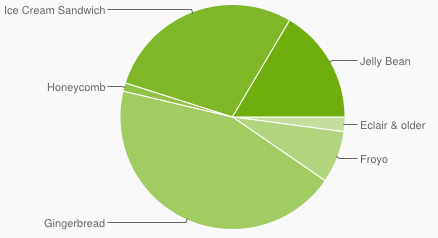 Not only are there many different screen sizes, each manufacturer supports different hardware features, and most importantly for media app makers, different streaming capabilities, so we need to choose the most popular devices to target. OpenSignal published a nice breakdown last year: 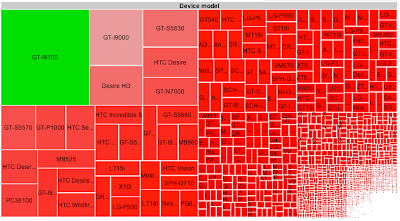 Happily, one is very dominant, the big green block is is the Samsung Galaxy SII followed by another Samsung and the HTC desire HD. So maybe we should go for the top three?

Note that we only target a few of the iOS devices out there. Xcode only builds for iOS 5.1 and later and there are really only three phone screens: 3.5", 3.5" retina and 4" retina plus two tablet sizes.

If I make an app for Android will they use it?

iOS users browse the web twice as much as Android users according to NetMarketShare:

This is hard to explain as Chrome and mobile Safari are pretty much the same.

If you are trying to make money, Android users are even less "engaged" than their iOS counterparts. Asymco published stats last year showing online shopping by OS. 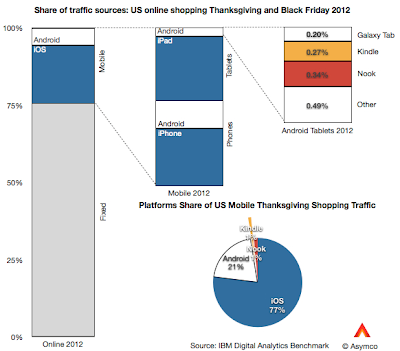 So despite being dominant in numbers, Android shoppers are 21% compared to 77% for iOS.

Even simple paid web browsing on flights as reported by GoGo shows a similar ratios: 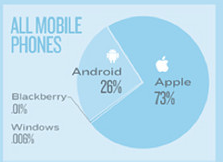 App Annie shows that App store revenues for Apps in the Google Play store are rising but iOS is still four times that of the most "popular" devices.

Does it cost the same to develop for Android as iOS?

I am reliably informed by people who have commissioned Android versions of iOS apps that it costs 30% more to make an Android version than the iOS version. This could be because they are targeting too many Android devices or it could be that the Android SDK is not as mature as the iOS SDK and takes more effort to implement the same features.

I'm also told that there's more money in Android development, presumably a greater demand for those skills and a smaller supply of developers - so perhaps the developers are being paid more thus pushing up the cost.

I would love to see every app developed for every device, that includes iOS, Android, Windows Phone, Blackberry, Symbian, Ubuntu, Firefox and more, but resources are limited.

When evaluating Android for the first target compared to iOS I think about [proportion of v1.4+] * [proportion of Samsung GSII and HTC] * [usage of device] * [willingness to pay]. (Reminds me of the Drake equation).

The result is very small compared to iOS at the moment.

Why don't Android owners use their devices, and why do they complain so bitterly?

Android devices are generally cheaper than Apple devices. If you are not prepared to pay a few dollars more for the device, presumably you are not interested in paying for Apps.

Feature phones, for people who just want to make calls and maybe send a text, have now disappeared and have been replaced by low end (old OS version) Android phones, so a proportion of the market have devices that have features they never really wanted.

My theory on complaints is that many consumers see an iPhone running apps and decide they want one. Those who don't go directly to an Apple store are met at a phone shop by sales staff who get a higher commission for selling Android phones so they tell the customer to buy this one as it's cheaper and "the same".

When these users start looking for apps beyond Facebook and Twitter they find that the pickings are slim. They're angry (with themselves) for falling for the sales talk and figure that abusing the developers for not porting to their cheaper phone is the most likely way to get what they want. (This post is my answer to that enquiry).

There are a lot of cross platform development toolkits. I think if it's possible to do something as a web app then it should be done that way so that it will be available on everything with a modern browser. But users like native apps for their responsiveness and robustness in an unreliable network environment. Facebook is a good example of this.

Cross platform development is always a compromise, it must abstract away the platform and often ends up being a lowest common denominator set of features. Users don't like apps that feel alien on their device.

I think the ideal approach, if funds were available, would be to have a team with a UX designer, graphic designer and specialist developers for each platform who can provide the "love" and focus to make an app that uses the features of each platform.

There is no silver bullet so far.

Don't misunderstand me, I want strong competition for Apple. It keeps them focussed and moving forward. I've spent much of my working life developing for platforms other than Windows and I know what it's like to miss out on Applications.

Apple has had amazing success in recent years making phones and tablets that non-computer nerds can learn to use in minutes. Apple is not targeting technical users in iOS and that group will be looking elsewhere for highly customisable devices. Fair enough.

I don't want Apple to "do a Microsoft" and start adding every feature they can think of - making the OS complex and confusing.

The proposition that Android is the first choice for developers right now is not correct in my opinion.

I welcome your feedback.
Posted by Peter Marks at 7:57 AM

It is an example of the Pareto principle, the top 20% users generate 80% of the income.

Actually the answer to this question depends on the developer to which he is comfortable with. Android has its own place and as it is progressing it won't be wrong to choose it as a first target.