Over the past few days the shack has been in construction mode. The MKARS80 from Radio-Kits UK, is a QRP (5W) 80m SSB transceiver based on the BITX20 design (with switchable two-way gain stages so the crystal filter is shared between receive and transmit).

This design includes a PIC microprocessor that serves as a frequency counter and provides "huff and puff" frequency stabilisation. As a bonus it displays DC voltage.

It's a clever design, simple enough for me to understand but I want to give praise the thought that went in to the kit in particular.

The construction instructions are very clear and components are grouped in numbered bags which have been divided up in part to avoid components that might be confused with each other being on the bench at the same time. 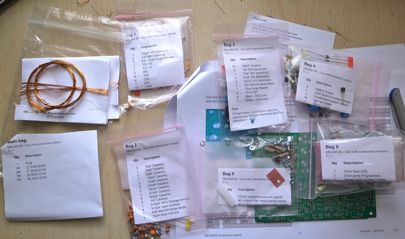 Warnings are given about common errors, like mistaking 4k7 resistors with 47k (red and orange can be hard to tell apart under some lighting conditions). 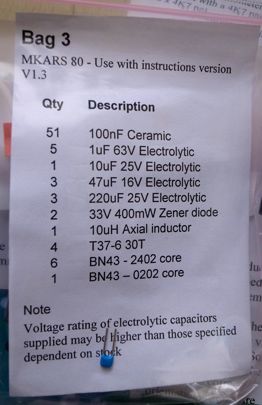 Building a radio kit is a bit of a test of concentration. Errors are costly and the damage done removing a mis-placed part can be unsightly and sometimes fatal to parts of the board, so it's best to double check.

I take it slow and have a break every 30 minutes. Lots of cups of tea, good lighting and Radio National on in the background is my secret.

Happily, once the tedious small components, resistors and small capacitors, are done it feels like the back is broken until you get to the toroid coil winding phase. Here the instructions are a little odd suggesting that a 30 turn toroid be wound from the middle with 15 turns either way. 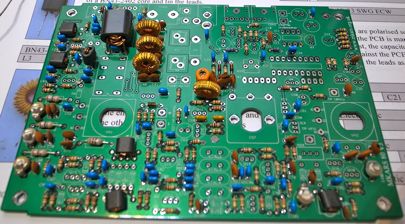 The supplied parts were accurately picked, I had one excess capacitor and was down one 2.5mm nut which was no problem at all. My kit included a note explaining that a 4k7 potentiometer had been substituted for the 10k, but in fact the specified part was packed.

Although I've played with electronics for many years, there's lots for me to learn. Building a kit builds my familiarity with electronic components and their sometimes confusing markings. Constructing the inductors gives me the confidence to home brew my own in other contexts. Aligning and debugging the project gives me a good understanding of how the circuit works and the logic of debugging a circuit.

In this case, the kit came to life without any problem and I was able to bring it on to the 80m band quite easily and was soon listening to stations talking. I was almost disappointed when it worked right off as the debugging phase is often the most valuable learning experience, but all credit to the kit designers is due.

I've heard about "huff and puff" stabilisation before but never used it. It's a clever idea where the VFO is pushed or pulled on to a series of fixed frequencies and held there by the application of a voltage that alters the VFO frequency. In use it's a little weird, it fights you if you tune a small amount, then it lets go and you can tune freely. When you stop it locks on to the nearest fixed spot. 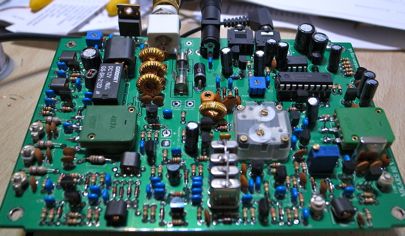 The LCD display shows the operating frequency and the Huff and Puff status as +- indicators which helps me to understand what's going on. Power supply voltage display will be a help when running off batteries, which is one of the reasons why I like simple transceiver designs - they tend to use a tenth of the power on receive of any commercial set and are more suited to portable operation for that reason.

There's even a file with a drilling template for the case. 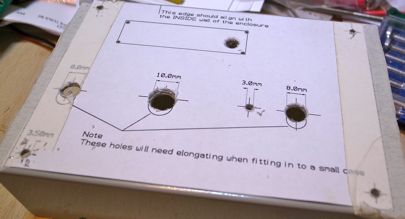 I enjoyed building the MKARS80 and look forward to getting it on the air. 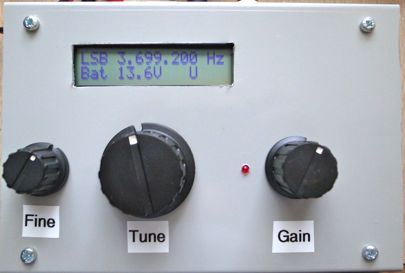 A particularly clever design feature is the transmit LED extinguishes at full modulation so you can adjust your level without a speech limiter.

Tuning is backwards, clockwise goes down in frequency, and the main tuning is very sensitive on my radio so I tend to use fine tuning most of the time. (Cleverly fine tuning also goes backwards - if it didn't it would be very confusing).

The microphone is connected via a 3.5mm stereo plug with the PTT on one contact and the Mic on the other, unfortunately it's the reverse wiring to the mic on the MMR40 I built a while back.

Kits are important and there should be more of them. This one has been designed with great professionalism and with the builder firmly in mind.

I listened to the end of a net on 3.600 and then called CQ. David, VK2EZD replied and gave me a good report including audio quality. David is located south of Sydney at Albion Park Rail which I make 120km away. There's a lot of static about, which makes it heavy going without AGC or noise blanking, but we had a pretty good chat before I had to run off to greet the family. Thanks Dave.

One problem has emerged. After transmitting for a while the VFO drifted way off frequency. Clearly the heat takes it out of huff and puff stabilisation range. I need to look in to this.

Was able to copy and was copied by vk2ezd David, vk2ane Bill, vk4ath Tom and vk2nc John. This time I let the radio warm up for about 30 minutes before the net and it certainly behaves better.

Reports of my signal were very good including audio quality which is gratifying.


Even with the warm up period my unit would drift when I started talking for a while. The solution is to replace two capacitors with zero temperature coefficient versions. I did this and now after about 10 minutes it's rock solid even during a long transmission. There are good instructions for this mod here.

Thanks to John VK2ASU for the prod and for having a QSO to test that all was working afterwards.
Posted by Peter Marks at 12:01 AM

G'day Peter
Great to read about your MKARS80. I built one a year ago and it would be good to catch you on air some time.

I've made some small modifications to my MKARS80 and these are detailed, along with a lot of other stuff, at my blog. http://vk3zpf.blogspot.com/

great, I also want to have, but I do not have enough money to own it

great, I also want to have, but I do not have enough money to own it