Thanks to Telstra Bigpond's excellent unmetered download feature it was a breeze to grab the ISO of the release candidate of Ubuntu 9.10 "Karmic Koala" to be released on October 19.

I'm installing on a netbook, the Acer Aspire One, and for the first time there are no problems of installer windows extending off the bottom of the small screen (1024x600). The installer is more beautiful than ever, I was particularly taken with the new timezone chooser.

Although I had Fedora 11 on the machine before, Ubuntu's installer didn't detect it and happily offered to wipe the disk saying there was no operating system found. Fair enough but it's always been a criticism of Microsoft's installers that they never want to co-exist with other OS's and it's a pity if this feature is broken.

First boot graphics are lovely, like a stage with a single spotlight from above. Unlike Fedora 11, sound on the Acer was smooth.

Wireless worked right off and found my network with ease. The menu bar icons are looking lovely and very "Mac like" these days...

The trackpad works well and the right edge window scroll is enabled.

I got a warning about "Incomplete Language Support" saying the language support files for my selected language were incomplete which is a bit weird for English. The window suggested an action and had a button to run that action. I clicked and it then wanted to update more stuff. In the end the language support install took a long time - it was getting English - Australian, it did get there after 17 minutes. Perhaps the release candidate servers aren't ready.

The Acer Aspire One fan has always been a problem, requiring a kernel module to stop it running flat out all the time. I've always had to build acerhdf which does the trick very nicely. Under Ubuntu 9.10 the fan seems to be changing speed so at this point I'm not sure if something is there to control it or if I'm just imagining things, I'll let it go for a while until I figure it out. Hmm, it seems to be under control but does run more than with acerhdf. Update: the fan was running all the time. Fixed now.

On a soft reboot, the wireless didn't come up. I've seen this before and it's fixed but shutting down and then starting up so I suspect that the wireless firmware gets in a strange state from time to time.

I guess it's Gnome, but visually everything is smoother and even on a low power netbook, visual effects, such as menu actions seem to fade in a little - rather like the Mac.

Browsing the network shows all our devices both windows and mac services. Fedora didn't show anything for me. Looks like it can see Bonjour adverstised services including ssh and Mac screen sharing - unfortunately the remote desktop doesn't support Apple's encryption yet. Browsing for ssh worked just fine though. I was able to browse for my mac and copy files to it using sftp all very transparently.

Finding printers didn't work for some reason, although it has in the past. Incidentally, I find the distinction between the Administration and Preferences menus a little puzzling. Printing is in the Preferences.

On the AAO suspend and hibernate both worked just fine although with the fast boot time I experience hibernate seems redundant.

There's a lot new in this release. Faster boot times thanks to continuing work on Upstart that has optimised the time to get going. The Aspire One boots in 25 seconds. 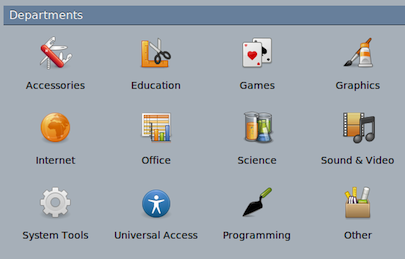 Gnome has been revved of course and is on 2.28. Before this install I had a look at the latest KDE and it's looking very nice these days too.

With this release Ubuntu is offering a storage in the cloud service. Despite some bad press thanks to Microsoft/Danger, backup to the cloud is really a good idea - I'm a long time dotmac/mobileMe subscriber and having lost a disturbing number of hard disks and even CDs I'm happy to let professionals manage that.

This is a very slick desktop. Visual effects, speed, graphical beauty. If your Windows 7 upgrade didn't go well, or you don't want to pay the Microsoft tax, I would definitely recommend Ubuntu 9.10 on a PC. Clearly being influenced by good things from MacOS which is a good sign. I wonder when a dock will appear?

In Ubuntu, you can change the theme/customisation to make it "MAC LIKE" and have the dock. I did this awhile ago.

Thanks igrg, I'll post something about it in the next few days.