For prototyping new projects where an Arduino is to be connected with common peripherals, the Dr Duino Explorer board looks very useful. It's a good board with lots of useful components but the documentation is infuriating and there are attempts to up sell the purchaser at every step. 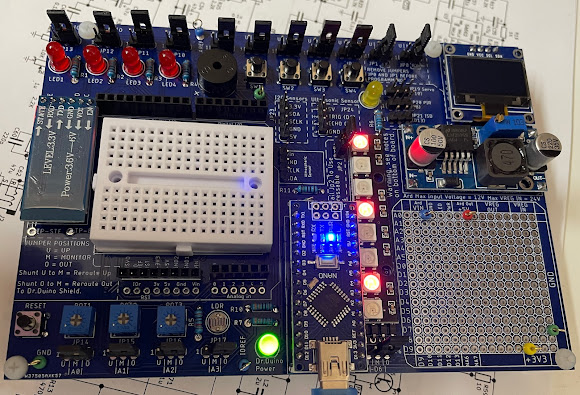 As you can see, there's LEDs, buttons, potentiometers, a light dependent resistor, a 128x64 OLED display, a bluetooth interface board, an ultrasonic range sensor (off board) and a row of eight NeoPixel RGB LEDs. Also there's a variable output power regulator.

In contrast to most other Arduino related products, visiting the DrDuino web site does not give you access to the construction or user manual. There is a link called Downloads but it tells you to go back and look in your spam folder for the instructions on how to log in to the site.

To get this basic information you must log in to the "exclusive" portal. Everything is strangely slow. Have you ever seen this on a modern web site?

I had to log in twice and it turns out that the site (Powered by KARTRA) is not compatible with the standard settings in modern browsers including Chrome and Safari. They suggest changing the default settings to re-enable third party cookies.

To be fair, the instructions are very detailed. What I found frustrating is that you have to step through them on the web site, one screen at a time. You are prevented from, for example, accessing the schematic until you've gone through every page up to that point.

In the end I visited each page and copied the content into a document which I could read on a tablet while constructing.

At several points during the construction DrDuino tries to sell you things such as PCB holder and side cutters with:

And... because you're a Dr.Duino customer, NO FULL PRICE FOR YOU!

There is a library to go with the board but I couldn't find it. It's not in the downloads area. Dr Duino happily uses libraries made by Adafruit but declines to share any work they've done with others. This seems counter to the norms of open source.

Anyhow, I don't want to be too negative. The board is good quality and has handy features on it. Construction went well for me and the OLED display and NeoPixel strip worked with the Adafruit libraries' examples unmodified.

Incidentally, I notice that despite all the security theatre, the link to the schematic seems to work even if you aren't logged in. Duh.

Nuts and Volts has a good review that is quite informative - better in fact that Dr Duino's own documentation.

Guido, if you're listening, here are my suggestions to improve this product: