The rise of shortwave broadcasting from China

On recent drive across Australia I was struck by the amount of shortwave broadcasting from China that could be heard.

There is some data available from the HFCC - International Broadcasting Delivery.

The files are fixed width fields which list broadcasts by frequency along with start time, end time, which days of the week, the country, the broadcaster and more.

Countries may have multiple broadcasts on different frequencies at the same time.

To measure output, I calculated the minutes on air of each listed broadcast and multiplied it by the number of days in each week that it's on and aggregated them by country.

Here are the top broadcasters as at August 2019. (Click for larger view). 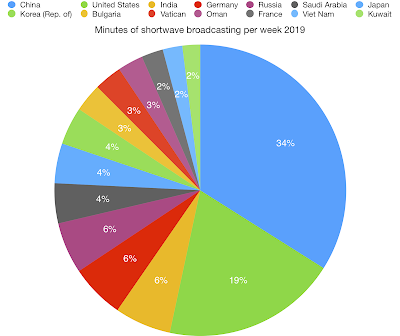 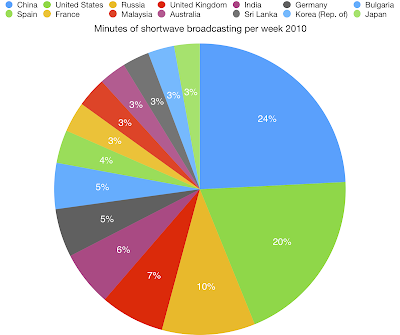 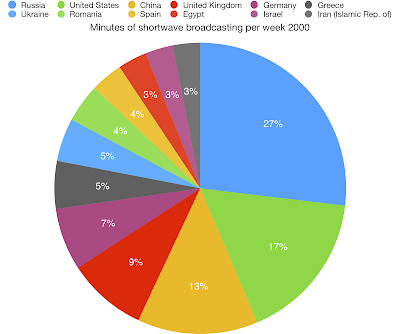 Here's the changes amongst the top broadcasters now over this period. China is clearly on the rise. 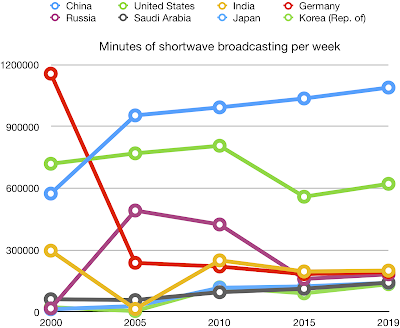 There are many flaws in my simple analysis:

Please let me know if someone else has done any analysis in this area. My thanks to HFCC - International Broadcasting Delivery for making this valuable data freely available.
Posted by Peter Marks at 4:10 PM

This was actually very well done. Working in an engineering field, it's good stuff. The ultimate was Radio Moscow World Service in the 70's. Who couldn't get enough of "News and Views" plus Vladimir Posner's daily talk?

I live in the USA and can receive CRI. But I was in Israel last month and couldn't believe just how much CRI is broadcast across the entire HF band and in nearly every language. I don't believe that I'm exaggerating when I say that at times CRI might have been at least 50% of the broadcasts I received in multiple languages simultaneously. And they weren't weak signal either.

Since 2014, Russia has not been transmitting in any AM band at all. How it was possible to calculate a few percent of its share in the total volume of broadcasting in 2019 is a big mystery.

Why is Romenia missing in the charts?