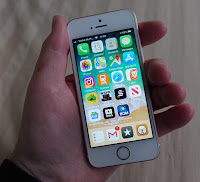 Apple should make a phone the physical size of the SE, but with the edge to edge screen. I'm waiting for in-screen TouchID to appear, or perhaps FaceID could be made to work at very high angles?
Posted by Peter Marks at 5:33 PM

My next Iphone will be a SE as well. I don't want a big phone like the X. I'm happy with my 5s now but is is slow compared to the SE and it runs a old IOS (10 something). Happy the WSPR Watch still works well. My wife has a SE, I will tell her to switch off siri to get more battery life. 20% is a lot! 73, Bas