A very enjoyable adventure. Being away, living in a van, helps me appreciate the comforts of home. This post is a collection of observations on the journey.

I slept in the van for about three out of every four nights.

TVs in motels often don’t have all the available channels. I auto retune them and find more. Perhaps a result of re-stacking?

There are people riding bicycles over the Nullarbor. The road is quite narrow and this seems very dangerous.

There are large numbers of people towing caravans across Australia. 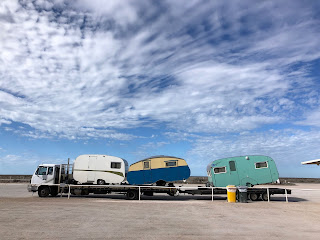 There are about four parts of the highway which are marked up as Flying Doctor emergency runways. You can pull off to the side if a plane lands.

Oncoming drivers will often raise a finger or make a peace sign, or wave, as you approach. I think it means that if you broke down they’d stop to help. Most truck drivers don’t bother but some trucks are aware of the effect they have on me as we pass and will pull way off to the side as they approach, I give them a friendly wave of thanks.

Google maps is superior to Apple maps in several ways. It has a lot more points of interest, particularly in the outback. Google maps seems to behave better when there’s no data, I guess it caches more. In Google maps, you can drag up from the bottom and do a “search along the route” to find petrol stations for example.

The Google maps search ahead feature makes odd choices about what to display, it shows the brand or name, the number of stars in Google reviews, and that it’s a “quick detour”, it does not show how much time to get there or the kilometres.

Motel rooms have a can of insect spray in the room.

Many small towns have FM stations. Larger ones have relays of ABC Radio National, News Radio and Local Radio. Sometimes the ABC relays are distorted and on one occasion the carrier was there but no audio. In most cases two FM stations are working, the horse racing station and the Christian propaganda station.

Australia is often called a “wide brown land” but my observation is that a lot of it is very red. In some places the earth is red, trees are red and green and the sky is deep blue.

During the trip I listened to some music but many podcasts which entertained and informed me. What a fantastic new media.

Not surprisingly I used up my monthly data allowance and the excess data fee is a high $10 per GB. On Telstra, I can buy data packs at a slightly cheaper rate but they will charge again in the following month. I've now learned that cancelling the data pack in the next month means you only get charged pro-rata which seems fair.

When data is scarce, it’s a new world. iOS lets me choose app by app what can use mobile data and I’ve turned off lots of apps. Free Wifi is very attractive but I’ve found it’s actually limited to 500MB and it’s easy to use this just downloading a few podcasts. Netflix downloads have been great.

I sleep a lot when living in the van. When it gets dark, it’s bed time although I spend hours tuning around on the broadcast band and particularly shortwave. When the sun comes up, I get up, make coffee and hit the road.

Listening to shortwave in a low noise environment, away from power lines, switching power supplies and plasma TVs is amazing. 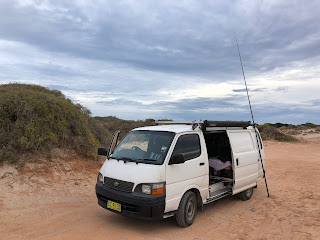 There isn’t a lot of English on shortwave these days. China Plus is everywhere, a bit of Voice of America and a bit of BBC. I haven’t been able to receive Radio New Zealand International in the west so I guess it’s beamed at the Pacific. I really miss the Radio Australia inland shortwave service.

A shortwave broadcast from India talked about the anniversary of a masacre by the British, they reported the deaths as 1,000. The BBC covered the same story but reported 300 deaths.

China Plus sometimes refers to the “peaceful re-unification of Taiwan”.

My antenna is a dipole cut for 40m. It’s held up by a 6m squid pole tied on to the van. The wire is a figure 8 twin cable fed from the balanced output of my antenna tuner. I tied the ends onto any trees or bushes near by using brickie string. 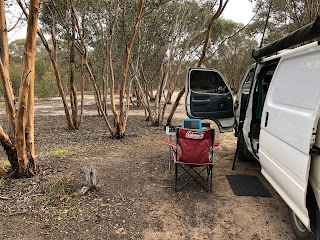 The largest cost of the trip was petrol. 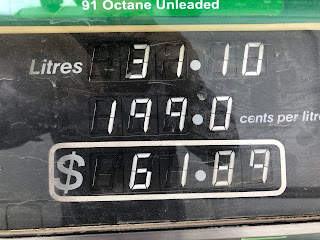 Some drivers are slow until there’s an overtaking lane and then they speed up.

There are cellular telephone towers on the Nullarbor but they’re not close enough for continuous coverage. There’s no 4G. When you get to one of these towers they are a sight to behold, the guyed tower is about 100m high and at the base are satellite dishes and solar panels.

Broken down cars can be seen at the side of the road. Recent ones have police tape on them, older ones are missing the tyres and are sometimes burnt out. Most have broken windscreens and I assume they’ve hit a kangaroo.

There are frequent skid marks on the road where a vehicle has hit the brakes. I guess these survive many years.

There are many museums in small towns and it's a great amusement to visit and see what's on show. 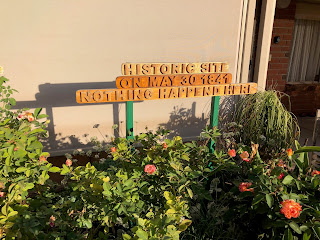 The most seen dead animal on the road is a Kangaroo. Signs warn of Kangaroos, cattle, camels and wombats. Leaving Broken Hill, heading west, there are a large number of goats but luckily goats walk away from oncoming cars rather than jumping in to their path.

On the way home I ran into a bit of a heatwave in northern South Australia. As I result I drove more than planned and have arrived a bit early.

I felt calm and happy during the journey. Watching the country change slowly is interesting. Tuning shortwave and the 40m amateur band was an absolute joy without all the noise heard in a city. Thanks to John VK2ASU and Kevin VK2KB for attempting contacts with me on several occasions.

It's good to be home again.
Posted by Peter Marks at 4:32 PM

Just as well you did not have any more mechanical problems. With a good car radio you can get daytime reception on AM ABC stations all the way across although most cars make to much electrical noise. Thought you might have come back via the Anne Beadell Highway, much more interesting way to go.

Congratulations, it quite an achievement for you and the van. I was very interested to read your observations and look forward to a full briefing at the formerly great Northern.