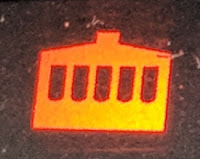 It turned out that the radiator cap, which has some sort of pressure release mechanism, was faulty and this explains the behaviour. Kindly they only charged me $12 for a replacement cap. No more warning light - I won't miss it.
Posted by Peter Marks at 7:57 AM