At the recent ARNSW Home Brew Group meeting I showed ADS-B decoding and even ran the slide show on a Raspberry Pi. (It is a big sluggish running a LibreOffice slide show though). Stephen, VK2BLQ wasn't there but when I visited today he showed me his magnificent Raspberry Pi desktop. 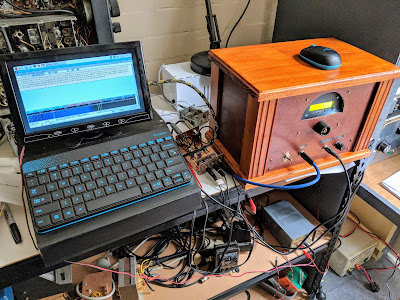 It's all boxed up somewhat like a Commodore 64 or Apple II of the old days. The screen is a little one meant for a car. On the right is a beautifully boxed up uBitx and in between is a home built audio interface with transformer isolation and VOX.

Here you see it running Fldigi quite well (although the screen resolution doesn't seem to make best use of the hardware). Great work Stephen and thanks for the home baked chocolate cake made with chocolate milk.
Posted by Peter Marks at 7:49 PM