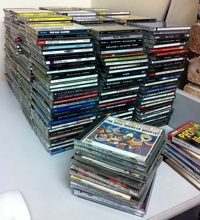 When I was young I used to buy lots of records. When CDs appeared I bought them all again! In recent years the CD collection has gathered dust and the only music that gets listened to is the stuff that's been moved on to computers and iPods. One of the great pleasures of having my music collection on computer is having it play random tracks and discovering wonderful tracks of unexpected albums. I decided to rip the entire collection. It's time consuming, although much better than it used to be, my Mac Mini imports at 8x these days. Going through the process threw up a few observations about the age of the Compact Disk that is drawing to a close: I've been looking around at the possibility of selling my CDs. It doesn't look like you get much for them any more. The eBay auctions often end without bids and the thought of sending hundreds to little packages out via the post office for a dollar each doesn't sound like a good use of time. Syncing my collection to iCloud seems like a good way to go. I hope it works! Backing up 52Gb of data is a responsibility I'm keen to offload. It would be nice not to have to buy all these tracks for the third time.
Posted by Peter Marks at 5:30 PM