Armed with a bag of adapter plugs, clip leads, a multi-meter and a torch, I spent today running PA sound for a local community group's annual festival. All sorts of technical hilarity ensued. 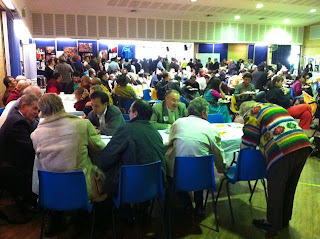 The day was a mix of speeches and musical performances ranging from solo voice, to stringed instruments with singers to dance groups. The music to accompany the performers was handed to me on CDR disks shortly before they went on. In other cases it was played from a laptop, sometimes an iPod.

One act asked for the singers in the backing track to be removed (there's software to do that apparently), I did what I could with the equaliser but it wasn't enough. Another singer wanted lots of reverb, which unfortunately wasn't available. All the performers wanted more volume, while some audience members cursed me for the overly high sound levels.

The most amazing request was this guy who handed me his phone showing YouTube and asked me to play a video over 3G to provide the audio over the PA while he sang along to it. He has more faith in technology than me. 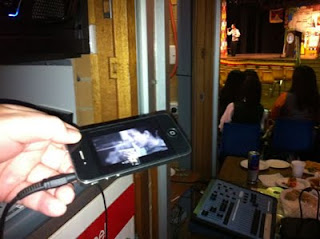 He said if a call came in I should reject it and play on. A detailed explanation of the loading bar in the YouTube player ensued. In the lead up, his phone slept and asked for a PIN, which I had to hastily get from him. Amazingly it was "alright on the night".

At the end I had to patch a DVD player's sound via a canon mic socket back to the mixer.

My compliments to the Allambie Heights School Community Centre which has excellent PA and mixer facilities these days.

All good fun but it's nice to be curled up at home where life is simpler.

I run audio for our primary school's annual xmas carols and bi-annual fete. Always a challenge! the school has a great PA system but no one new how to use it properly before I offered to assist. I have since built a small stage box and I always take extra leads, power packs, gaffa tape and else. I also make it a habit of checking everything at least a day or so before a "gig".