No video on Macbook? Reset pram

My daughter's well used, and loved, MacBook had reportedly died. No video on screen at all. No video output to an external screen either - I feared the worst. 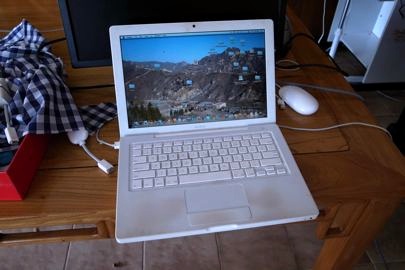 Turns out that resetting PRAM, by booting with Command-Option-P-R held down did the trick.

Even booting from an installer CD produced no video. Reset PRAM - recommended.
Posted by Peter Marks at 5:33 PM

Wish that trick could fix the G4 PowerBook that I killed last week. I took it away to a trip to the Snowy Mountains, hoping to brush up on some JavaScript, but a leaking water container in the car emptied itself onto the G4. I let it dry out for a couple of days before switching it on, but when I did... well, there was much smoke!

Anyway it appears now that it functional, except the backlight for the LCD is dead (via external monitor is OK). I think it might be something called an inverter which has blown.

Back to work tomorrow to explain what has happened to their computer... oops!

It's time to release the smoke from a G4... I think you did the right thing.