"Brand New 12.1" Netbook - Choose Between Black or White Sale price: AU $449.00" the ebay ad read. Having found the 600 vertical pixels a bit limiting on a normal netbook I thought I'd give this one a go. 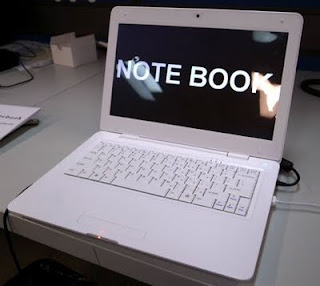 It's certainly a generic laptop, on boot it says "Note Book" on the screen. The user's guide also calls it Notebook and there's no mention of who the manufacturer is. The styling is influenced by the Apple MacBook Air although it's not really as thin.

It's a 1.6GHz dual core Atom processor, 1GB RAM, 160GB Hard disk. The ad promised 1024x768 but it turns out to be 1366x768 which is a nice bonus. Video out is via an HDMI socket which isn't very useful for me but might be good for playing back video on a TV. Battery life seems under two hours and the fan runs all the time and makes an annoying noise. The screen is clear but the glossy surface combined with various dents and other marks makes it rather unpleasant to work with.

Installed sensors but it only reports one temperature sensor and no PWM fan controllers.

I wanted to run Ubuntu, in particular 9.10. On install sound and ethernet worked but no wireless. It turns out the wireless device is a 3DSP Wireless 802.11 B+G USB adapter. These are a software device that combines both bluetooth and Wifi. The good news is that there is software for linux here, the bad news is that it doesn't work with 9.10 but rather 9.04.

Here's the chip on a little board inside: 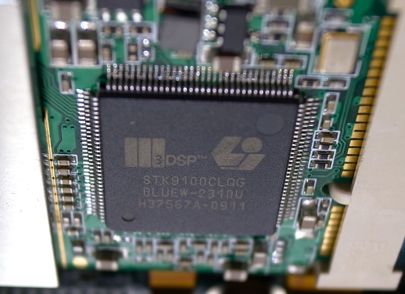 If anyone knows where the USB pins are on this connector I'm interested in wiring in an alternative adapter.

In the end I re-installed Ubuntu 9.04 and got it going. The software is rather clunky and doesn't integrate well with the normal wireless user interface.

The program needs to be started up and then it finds networks and connects, the normal Gnome network icon seems unaware of it. There is even a petition to the makers to open up their software.

Built in video camera works with skype but the microphone didn't seem to be heard by skype for some reason.

Inside the motherboard is attached to the underside of the keyboard. It's not hard to pull apart but watch for the flat cable attaching the trackpad and buttons. 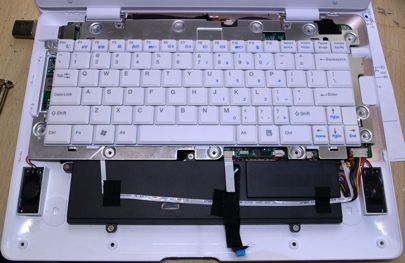 The battery is very thin so the battery life is remarkable given its size. I didn't disassemble further than this for fear of damaging something.

For the money, this laptop ok but as always you get what you pay for. The one let-down is the noisy fan that always runs.

I got tired of the weird software from 3DSP for their wireless device, and went shopping for a USB Wireless adapter. This also let me upgrade to Ubuntu 9.10. I'm happy to report that the D-Link DWA-100 USB Wifi adapter works brilliantly with Ubuntu 9.10 out of the box.
Posted by Peter Marks at 4:14 AM