On the road with a 3G dongle modem 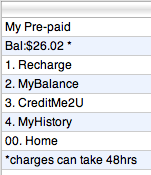 Travelling at the moment and this time I've bought a USB wireless internet dongle from Telstra.

The network has good coverage but here in Melbourne I've found that sometimes the signal is good but data just doesn't seem to get through, same on my phone.

What lets it down, on the Mac anyhow, is the software. "Telstra Turbo Connection Manager" is an amateur attempt to wrap the modem's low level functions in a graphical interface. Topping up obviously uses SIMToolkit and is barely workable. It took me four attempts just to top up - kept timing out.

To create the network on the Mac is touch and go, sometimes it works but often it just gets confused. I think it remembers the index of the device it's using and several times it's tried to connect using the Bluetooth interface.

Right now, (very early morning), ping times are about 800ms, during the day it was over 2s.

Of course all this wouldn't be necessary if my iPhone still tethered..
Posted by Peter Marks at 5:03 AM

I suppose there are many reasons people call them 'Hell$tra'.
Other comments are about their business model being about increasing subscribers, not users of their products. The business survives nicely on line rental and mobile network access charges.

Anyway, if you're going to enjoy the use of a slow product, you may as well not be paying for the privilege of been bled dry. NextG data costs are roughly between $0.13-$0.25 depending on if you're looking at included value or excess charges.
Take a look at Exetel who offer almost wholesale prices on the Optus network. One-and-a-half cents ($0.015) with a $5 access fee gives you 1Gb for $8, vs Telstra's 200mb@$19.95

I only just came across these deals last week. I don't work for exetel or have any services with them. The mate who told me about it is using VOIP for all his calls and using his phone as a data device. I'm considering the same.

Welcome to Melbourne Peter, I often try to catch your commentary on RN on the way to work. I use NextG on my Moto V9 linked through USB to my laptop and have had very good response from it. My recent rural use was in Warrnambool and again good service. I guess having not used a USB dongle I can't comment on their quality.

Not a good sign when the software's messages are full of grammatical errors.
"The request has been time out" - egads! (And why is there an exclamation mark at the end?)
Sheesh.

I have had 3g dongle for my laptop for ayear,to use in my motorhome,i find that any where near the coast it fails to connect,in one place redcar it worked ok. One month and later date failed to connect. Completely unreliable i woud avise against having one?