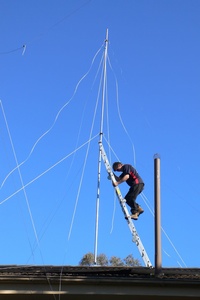 My antenna support is pretty dodgy. It comprises a netball hoop stand on a balcony, a piece of TV tube U-bolted to that, and finally a long telescopic pool cleaner pole. The whole arrangement is rather loosely guyed.

Having said all that, it's stayed up for over a year and I get excellent reports for my signal on 80m.

It was time to get something more elegant and so I turned to the web to enquire about getting a mast installed at the peak of the roof.

Dave, VK3ASE, had recommended a Hills Teletower and a quick call to a friendly local installer Digitel and we are away. 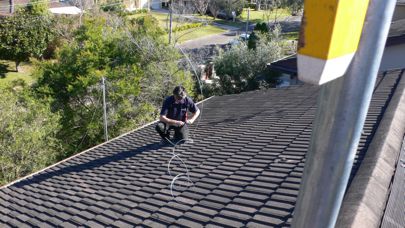 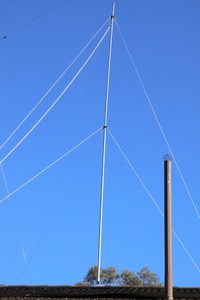 Mark is friendly and efficient and quite understanding about my needs not including a TV antenna. Rather I have a pulley mounted just below the top guy ring on a 20 foot Hills Teletower with a loop of line through it so I can hoist my balun up without difficulty.

The whole project cost $605 which seems reasonable to me and reduces my anxiety on windy nights when I often listen for my current arrangement to fall down.

Mark admitted that he "had a bit of a chuckle" as he approached the house and saw my current system. I can recommend Digitel to hams in need of some extra height.

Over the weekend I'll de-commission the netball/pool pole and switch over to the new support. Now we just need some sun spots.

I was going to wait for the weekend to switch my dipole over but couldn't sit still with the tower beckoning. 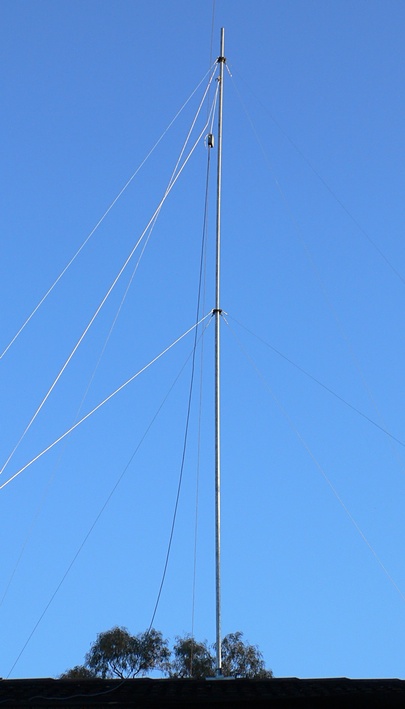 Had a bit of trouble getting everything on the right side of the guy wires but in the end it's up nice and high and is much more stable than the old arrangement.

80m seems quieter than before and much less RF gets into the shack which is always good. A wise investment I think.

Had a contact this evening on the home brew net with VK2ZTM Tim and VK2EMU Peter. Both gave me excellent reports. I could barely hear Peter but I heard him say I was "booming in".

Tuning around, the band seems less noisy and I'm hearing lots of stations. Unfortunately my daughter reports that I'm getting in to the TV which I didn't before, might have to do some work on that.