A bit of international travel has re-ignited my interest in short wave radio listening.

A long term portable Sony radio user, I bought the Degen DE1103 about a year ago and while very impressed with its sensitive reception, it has some serious usability problems - not the least is the lack of a volume control (well you push a button then spin the tuning dial).

The Tesun PL-600 is larger than the Degen by about 1cm in both height and width and very slightly thicker. Powered by four AA batteries and supplied with 1100mA Hr cells and a switch mode power supply. 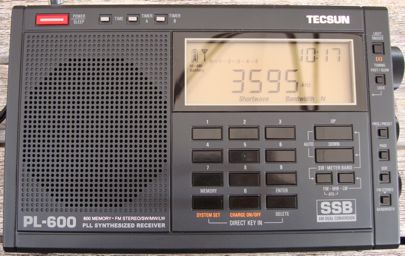 Like the Degen, this radio can charge the internal batteries and has a simple timer mechanism to stop charging after the right amount of time.

The display is simple and clear, showing the frequency, time (or memory), a five segment S meter, battery state, bandwidth and other status information.

The decent sized tuning knob on the side is smooth and has fast or slow modes. There is a large volume knob and a large BFO knob with a centre click. 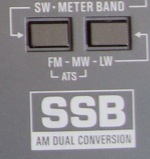 Clearly the ability to receive single sideband is a major selling point as it's shown in big letters on the front.

Similar to the Degen, this radio has two alarm timers and a sleep timer, where it turns off after a period of time. I use the sleep timer all the time to play the radio as I go to sleep but not run all night and go flat.

When I first used the radio it behaved bizarrely until I pushed the reset button in the base with a bent paper clip.

The frequency can be set either by direct keypad entry or by stepping up and down through popular bands and then tuning with the knob. 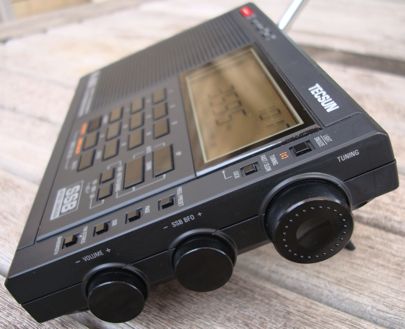 There are 600 memory locations, which is pretty silly, but it's easy to store favourite frequencies in the memories. The unit can be switched between "freq" or "preset" mode. In "freq" mode the tuning dial rolls through memories and the key pad can be used to directly select memories by keying the number.

I like the Sony 7600 system where low memories can be chosen with just one key press, on this radio you must key Zero One to choose a location. One button choice would be nice.

On the side there are switches for antenna gain, and audio tone. 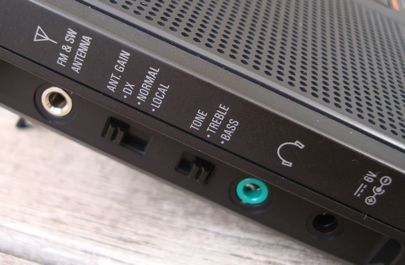 In the box, there's a nifty long wire antenna on a flat spool with a clip for the curtains, also there's a rather poor stereo earphone set.

Audio quality is not great, on FM the treble is good but bass is boomy and there is some distortion. AM band audio is quite bad on local stations due, I think, to signal overload. The antenna attenuator switch has no effect on MW reception and here in the city many stations sound overloaded. Distant stations sound better but still distorted.

Audio distortion probably doesn't matter too much for short wave listening but I couldn't recommend this radio for music appreciation.

Listening to FM on headphones indicates that the loud speaker is somewhat at fault although it's clear that high frequencies are rolled off quite early on FM.

Tuning is nice and smooth, unlike some of the Sony radios, there's no noticeable chopping as you spin the dial.

Although I do use the sleep timer (where the radio plays for a settable time and then turns itself off) this feature remains mysterious despite the well written manual. For some reason it often triggers when I turn the radio on and I can't figure out how to turn it off.

Another annoyance is that the narrow bandwidth selection in short wave carries over if you switch to MW.

Sensitivity is claimed to be 20uV on short wave and certainly it's sensitive enough to hear band noise which is all you need. I'd love to see a decent AGC in a portable radio like this one day.

Here it is listening to the WIA Sunday broadcast just using the whip antenna.

The side band BFO adjustment is a little sensitive, but usable.

This is a well designed, sensitive portable radio, well suited to folks like me who want to travel and listen to short wave. Let down a bit by audio quality and overload on MW, some usability complaints and the noisy switch mode power supply that came with it from AV-COMM.

Amusingly, along with my radio came a letter, dated April fools day, from AV-COMM's Technical Director Garry Cratt, stating that they do not warrant the radio if you run it just from the supplied power supply.

This seems rather poor as I would certainly regard the ability to run plugged in with the supplied adapter as a core feature. I can only assume that they've been coming back damaged.

I paid AU$179 at AV-Comm which seems a little high given that the big value-add is the power supply which they feel will damage the radio if used. They are available for direct import via Ebay sellers from AU$127 including shipping.

Despite these quibbles, I like the radio and will take it on my next trip.

Update: use in the field

I'm travelling with this radio and I have to report that I'm finding the internal charging feature just doesn't work for me. Not sure if it's the radio itself, or more likely, the supplied plug pack.

You set it to charge and it does so for only a few minutes before stopping. Consequently the batteries never get much of a charge. I've tried changing the setting for mAhr in the radio but this has no effect.

My guess is that the switching power supply somehow confuses the radio's circuitry that detects full charge in the batteries.

The other issue is hardly surprising, the switching supply (that I have to use as the batteries don't get charged) creates so much electrical hash that shortwave is un-usable.

Today I went out and bought some AA primary batteries.

Sony makes a few great products, among their best are the AA battery chargers. I purchased one with an LED to show the status of each cell. It also allows a deep discharge cycle to reset the "memory" effect. The charging is very fast, perhaps two hours.

I roll between two sets of 4 AA batteries, each set runs the radio for a couple of days of pretty heavy use and this scheme works well.

Despite having the long wire antenna dangling out of my tenth floor window, my conclusion is that this radio is not sensitive enough. Over night I often cannot hear band noise and I'm sure there's stations there I'm missing.

One daily pleasure is listening to Radio Australia on 11840KHz in the morning. AM is on from 6am local time, there's "Breakfast Club" and my old favourite "Connect Asia". The signal belts in here in Kula Lumpur.

Excellent to hear a presenter, Phil Kafcaloudes, who knows the international phonetic alphabet by the way.

I found your review quite interesting. Did you have time to look at the system set codes ?

I reckon there must be more codes that do something but are not in the manual like 03 which I am told gives airband ?

Haven't tried poking with the other system set codes. How did you find out about 03?

1- Short press on the ON button, then you can set the sleep time length. When you turn it on this way, you are suing the sleep mode.

2- Long press on the ON button. This way you are using the ON/OFF button, without Sleep function.

Do you have a copy of the manual in English? Could post it on your website in PDF format?

It my dilema nowadays!

I've google but I can't find a comparison or any opinion in this regard.

Peter: Have you had any experience with G6? thanks!

03 code gives you an air band indeed, unfortunately you wont be able to hear anything in that band due to lack of filters for air band. To fix this you must get into inside the radio and disconnect original HF filters from the rf transformer that is located just before first mixer and put in place for example simple 100MHz high pass filter. This will allow air band signals to pass to the mixer and will attenuate short wave frequencies. More here: https://www.elektroda.pl/rtvforum/topic1822782.html
and here: https://www.youtube.com/watch?v=Twh0qWeyZF8&t=36s