How about some outage honesty Bigpond?

I've been pretty happy with Telstra's Bigpond cable. When it works, which it mostly does, it works really well. Here it is just now:

My experience seems pretty good compared to others in Australia and even internationally.

However, for the past two or three days, it hasn't been working well. Ping loss up to 50%, some sites not reachable.

Bigpond has a service status page. This page thinks everything is just fine.

The page seems only to show the status of each of BigPond's web sites, it says nothing about network problems.

To get help you must ring 133 933 and go through an interactive voice response system that laboriously makes you pretend to reboot your computer (several times), the modem, and any routers you have. Naturally if you're at all technical you've probably done all this.

Under questioning of the guy I got to, it turns out that the trick is to say "Consultant" to get to the live person queue directly.

After about 30 minutes on the phone it turned out that there was a known outage that would affect me and that it was being worked on. Duh.

Some hours later all seems OK again but I resent being treated like a mushroom.

People like me rely on our internet connection to do work, this includes supporting customers who may have a critical issue that needs to be fixed.

I hope that the government's new broadband wholesaler has the good sense to show honest information about network problems. That's a much better way to reduce calls to the call centre than having a punishing IVR. Internode seems to have a good system and ironically provides a link to Telstra's wholesale page that did show some problems earlier.

Set up a cron job to try one ping to www.google.com.au every 60 seconds and log it to a file. It's been running for two days so far and here's how it looks.

For this plot I average ten samples so a full bar is 100% good and anything less, like several at 50% packet loss makes the internet almost unusable here.

Ironically, it's taken me some time to upload that graph. Perhaps more ironically I had trouble uploading the picture of the upload error: 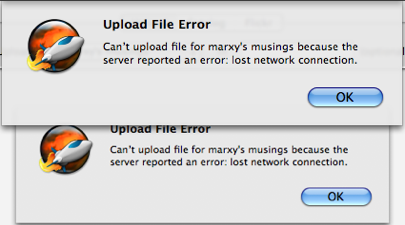 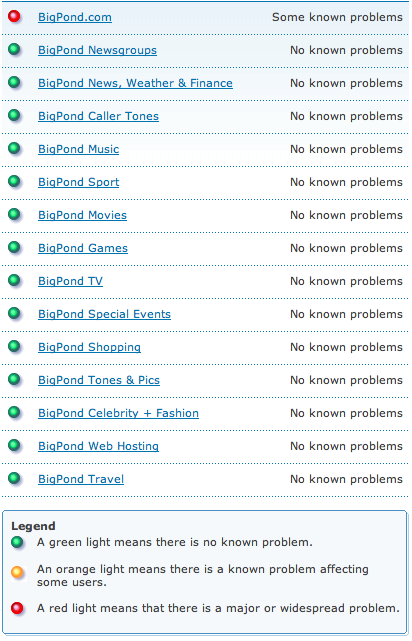