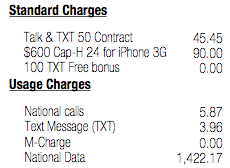 As you can see it's rather excessive. I was unsure about what my data usage would be so I initially signed up on a business capped plan that would give me 500Mb per month.

There's a number of anomalies here, according to the online usage Vodafone say I'm entitled to 500Mb and that I've used 12.11Mb so far with 487.89Mb remaining:

From the 15 page bill I've been sent, it looks like their billing system is continuing the old practice of charging in units of 5 minutes for any internet traffic:

Certainly not the way it's expressed in the plan agreement.

Presumably I'm not alone but I'll hop on the phone to them today and try to sort it out. Wow, that iPhone sure does increase data usage. 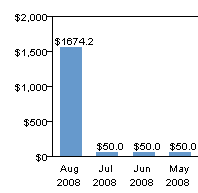 Did anyone else experience this?

Lara seems to be having hickups this morning.. Anyhow, it turns out that when I purchased the iPhone, which can only be done on an iPhone plan, it was not immediately put on the iPhone plan but rather stayed on my old (high data cost) plan until the end of my billing cycle.

Gavin at Vodafone politely told me that nothing could be done and that I should talk to the store where the phone was purchased to take it up with them.

I've now spoken with Reggie at the dealer and he was sympathetic and said he'd call Retail Support about the issue and call me back...

Reggie called back to let me know that the problem has been escalated to the "iPhone Taskforce" who are working through these issues. They will call me in about two weeks and I shouldn't worry about the bill in the mean time.

Thanks to "tester" for the link to a thread on Whirlpool where "Kirsty from Vodafone" says:

Vodafone addressed the issue some of our customers have experienced with purchasing their iPhone cap plans midway through their normal billing cycle in a press release dated 25/07/2008. In the past, plans were only changed on the bill cycle date. We acknowledge that this is not practical for customers signing up for the new iPhone 3G caps. From 23 July, anyone signing up for a iPhone 3G cap will immediately be able to enjoy the benefits of their new plan, rather than waiting for their bill cycle date.

Vodafone is reviewing the excess data usage of it's customers who signed up to an iPhone 3G cap mid way through their bill cycle, and will waive any charges that would not have been incurred if the customer had been able to use their iPhone 3G cap, with its voice and data allowance, from the outset."

This is certainly good to hear.

I'm pleased to report that my bill has been re-issued and I've received a credit for $1,500 on that bill.
Posted by Peter Marks at 3:10 PM

Ouch, I hope they work that out! No doubt you won't be alone in your billshock related to the iPhone 3G roll-out.

Had a similar issue, $1775 for 12 days usage. I contacted the TIO (Ombudsman) who in turn had Vodafone ring me and cancel all the excess charges. Apparently Vodafone are supposedly now contacting all iPhone users to explain the situation

When I rang Vodafone they seemed mystified and tried to tell me that it was my fault for being on the wrong plan...

I based my case on the fact that at no time during the sign up process was I told that the iPhone will connect every 5 minutes (or so) to sync its data. All I was told was 'try not to use the internet too much until you next plan cycle starts'. The guy form Vodafone who called me was extremely helpful and more than ready to cancel all data charges for the 12 days.

As I could only get an iPhone on an iPhone plan I simply assumed that it was on the plan. They never mentioned any period on my old plan.

It was very busy in the store that day of course.

Thanks for the tip though.

I had heard of a few people having this issue. There's a comment from Voda on whirlpool:

thanks for that. I've quoted and linked it in update 3 above.

Hi i am wondering can someone help me i by new to Bill and have not received my first bill as it is not in my own name once the letter is sent out will all the message i have sent and received be on it. As in will each message be wrote on the paper please help