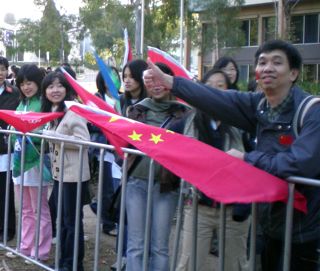 As a family, we decided to travel to Canberra to watch the torch relay and join the crowd in support of the Tibetan community. I headed out early for a commitment with the ABC and was surprised to see young Chinese people starting to mass along Northbourne avenue quite a long way from the city centre.

It was about 7:40am and 5 degrees C, so it was pretty chilly to be standing out there. I had a chat with the young Chinese people who seemed nice and had taken on "ozzie" nationalistic behaviours such as being wrapped in flags and with flag temporary tattoos on their cheeks. At that time all seemed pretty well, except for the stream of busses arriving with more while I watched.

Later we walked to the lawn in front of parliament house. Here we had to get past a large crowd of Chinese nationalists who were chanting "One China", so we could join the Tibet crowd. It was a nice group although some people had rather gruesome images of dead Tibetans out for display. There were speeches from Bob Brown and K.D. Lang as well as others. 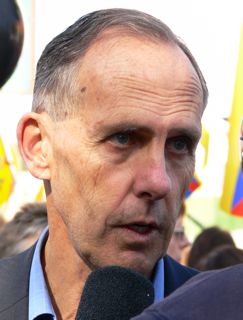 Bob's a real trooper, he gave a great speech and freely mingled with the crowd. He's pictured here talking with a reporter from Deutsche Welle.

The pro-Tibetans and pro-Chinese groups stayed pretty separate until after the torch went by and we started to move over the river to try to catch up with it again.

As we walked the groups started to interact and it was not pretty. The Tibetans were basically saying that they are not anti-china, but just want basic human rights for Tibet and would like China to at least talk with the Dali Lama. The Chinese crowd were quite intimidating, both in their numbers, their organised uniformity and what they were shouting at us. There were people driving by in cars aggressively giving us "the finger" through the window, their faces hidden behind red flags.

The Chinese would shout "One China" and if someone asked about human rights, they'd shout back "you know NOTHING", which really didn't help as it wasn't clear what they know that we are yet to be informed about.

We all walked down from parliament house, past a rather ominous blood bank bus with "don't ignore the need for blood" painted on it, and over the bridge to a park on the other side. Here we were getting stuck and the intermingled crowd was getting agitated. The huge police numbers in Canberra were clearly focussed on the torch and were not much use where we were or even in directing traffic. The mood was turning and I suggested we exit. My wife felt it best to stay as her presence as a witness might prevent violence.

As I left the scene the riot police turned up and ran in to settle things down. 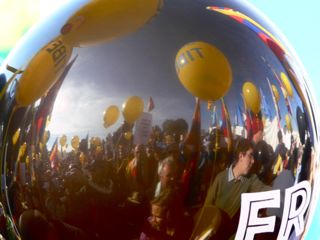 All in all, it was a good day for democracy in Australia, as Bob Brown pointed out, if we'd done this in China we'd all have been arrested and I'd add that there would be no trace of it in the news or on the internet.

We watched the evening TV news versions and the local ABC TV had by far the most accurate version of events.

I like and respect the Chinese people but I'm puzzled about what the government is so fearful of that they must violently put down any opposition and censor the news and internet. Are they so brittle that words will harm them?
Posted by Peter Marks at 1:22 AM

I wonder about the Chinese spectators. I get the feeling that they don't believe in democracy in Australia or for China. They don't believe in human rights--not just for Tibetans, but for their Chinese "brothers" and "sisters" in China. I know they don't have brothers and sisters because of China's one child policy.

The Chinese spectators should have included Australian flags to wave. Instead, I only saw communist red. This is why I question their belief in democracy.

I was there at the protest and the behaviour of the sea of Chinese students who were bussed in was disgraceful. They monstered individual Tibetans and yelled abuse at Australian supporters. They appeared nonplussed when challenged about free China or lack of open media/Internet in China. Chinese students need to look at the Internet while in Australia - they certainly won't have the same access in China.

It was by far one of the most intimidating experiences I have had. A huge angry mob hurling abuse and poking flag poles in our faces. I was hit by a couple of plastic bottles that were thrown at us. There were several assaults on Tibetans by the Chinese, flags stolen and torn into pieces, and the Tibetans I can proudly say, were disciplined enough not to relaliate once as far as I know. I was disappointed to see the papers reported the Tibetans who were arrested for stepping over the line. There was so much more to report that day. The police and security did a great job under very stressful circumstances, and I for one was very grateful to have them around. I think they were also surprised at the numbers and aggression of the despatched Chinese students. A big thank you our speakers, especially Senator Bob Brown and extra special bonus guest K D Lang. Thanks to the signwriter, and hot air balloonist, and to all the supporters who gave so much moral support to the Tibetans. Thanks so much.

I think we are starting to see the true colours of Chinese Nationalist Communism, and it's not pretty, is it?

Ironic that the awarding to the Olympics was to 'open the Chinese up' to liberal values when really what it is doing is showing in no uncertain terms is how utterly undemocratic they actually are.

Tsewang said...
This comment has been removed by the author.
4:55 AM