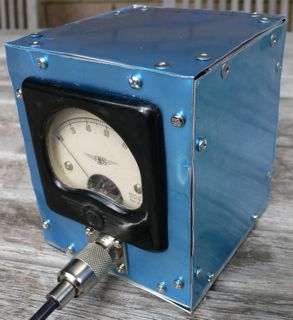 In preparation for the next NSW Home Brew group meeting at Dural where we will be having a power meter calibrate-athon, I've built a crazy box for my simple QRP power meter. Haven't tried to calibrate it but the output of a Pixie 2 (at 200-300mW) bashes the needle full over.

The box was constructed with 12mm angle aluminium at the edges and 0.5mm aluminium plate. That aluminium plate is probably a bit too thin but it's very easy to work with using simple tin snips. I was even able to cut the round hole for the meter with the snips.

All boxed up, it feels pretty sturdy and looks rather steam-punk.

The blue is a plastic protective layer that came on the sheet metal from Bunnings, I'll peel it off when it gets a bit scruffy.

I look forward to calibrating it in a few weeks.
Posted by Peter Marks at 12:05 PM