We've been away for a few days and I left the QDX doing WSPR on 40m. It ran for a few days, then stopped receiving any spots. It was still being heard for a day or so but then even that ceased.

The theory was that the Linux laptop had lost Wifi and when I returned I found that it was asking for Wifi authentication - which is puzzling as this is stored. I got it back on Wifi, and rebooted, but still no reception. I noticed that the pass through SO239 on the wall plate was a bit bent. Outside the carnage was clear. 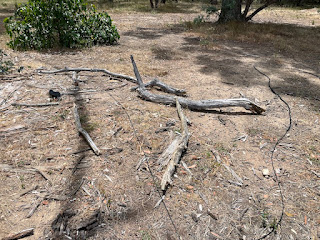 A branch on the dead tree that holds up my various dipoles had fallen. Coax had somehow been ripped from the shack end. I wonder if perhaps a kangaroo had hopped through it and pulled the branch down in the process. Too hot today to go drone antenna flying but I'll get it back up probably tomorrow.

Hmm, now that I look it's clear that more damage was done than initially noticed. One leg of my magnificent 80m dipole was down. Up again now.

The coax to the 40m balun had been somehow ripped from the plate on the wall of the shack but interestingly the other end, normally high in the air connected to the balun, seems to have been attacked by something nibbling at it.

My guess is that a bird was attracted by the bright red heat shrink but there is also bites in the coax near by.

I'll re-terminate both ends and use black heat shrink this time.